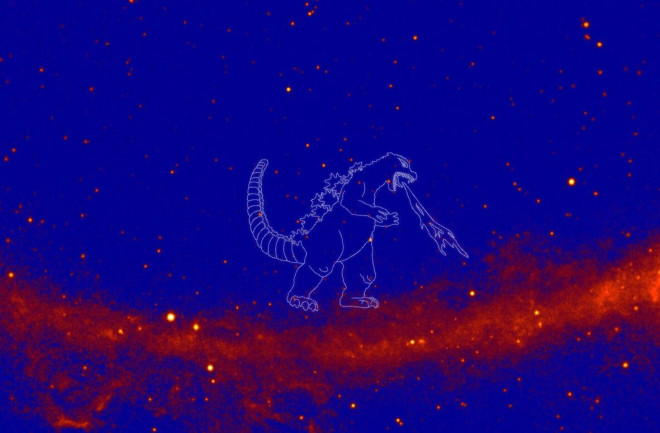 The Godzilla constellation in the gamma-ray sky — a new set of constellations based off of gamma-ray emissions observed with NASA's Fermi Gamma-ray Space Telescope. (Credit: NASA)

For countless years, humans have gazed up at the sky and made sense of the stars by finding shapes in them — constellations of heroes, animals, and well-worn tales. Now, to celebrate the 10th mission year of NASA’s Fermi Gamma-ray Space Telescope, scientists have used the telescope to develop a new set of constellations that correspond with gamma-ray emissions.

Gamma rays are the most powerful in the electromagnetic spectrum, and they’re typically only produced by very powerful objects. Supermassive black holes at the center of galaxies emit gamma rays, and gamma rays can also spring from explosive gamma-ray bursts, pulsars, the debris of supernova explosions, and more. The Fermi telescope has spent the last decade scanning the sky to compile list of gamma ray sources in the observable universe. That’s given them an array of points, similar to the stars we see shining in the visible spectrum.

In what is known as the “gamma-ray sky,” scientists have devised constellations inspired by many of the same things that inspired the starlight constellations our ancestors gazed at.

There are 21 Fermi constellations, including the Hulk (created from a gamma-ray mishap), Godzilla, the Starship Enterprise from “Star Trek: The Next Generation”, the TARDIS from “Doctor Who”, gamma-ray bursts, dark lightning, spider pulsars. Important landmarks from partner nations show up as well: Mt. Fuji for Japan, the Colosseum to represent Italy and more. The constellations even include a Saturn V rocket to represent Huntsville, Alabama where the gamma-ray burst monitor team is centered.

“The hope, of course, is to make the gamma-ray sky more accessible,” Ferrara said. “By creating constellations that tie into themes that people already know and think about, we hope to bring gamma-ray science into their thoughts.”

Ferrara and Daniel Kocevski, from NASA’s Marshall Space Flight Center, have developed an interactive webpage so that the public can easily engage with these constellations. The interactive site uses a map of the gamma-ray sky from Fermi and artwork from Aurore Simonnet, an illustrator at Sonoma State University in Rohnert Park, California.

Users on the site can explore the gamma-ray sky themselves and learn about the name, artwork, and details behind each constellation.