Some (kinda) good news: a bill designed to promote the teaching of creationism in Tennessee public schools has been put on hold until at least next year. Earlier in April, the Tennessee House passed this bill, which basically says teachers can help students find weaknesses in scientific theories -- and while that sounds legit on its surface, it's actually very thinly veiled creationist rhetoric for attacking evolution (read the link above for more on this). To be made into state law, the Tennessee Senate would have to pass the bill as well, but they decided to put it on hold. The thing is, it was tabled basically due to scheduling and not because the bill is antiscience, antireality, and potentially unconstitutional. I imagine when the Senate reconvenes at the next session it'll pop right back up, as these creationist whack-a-mole bills do. After all, this is the same legislature that grossly mischaracterized a quote by Einstein to support creationism. So science education in the Volunteer State is safe... for now. Therefore: 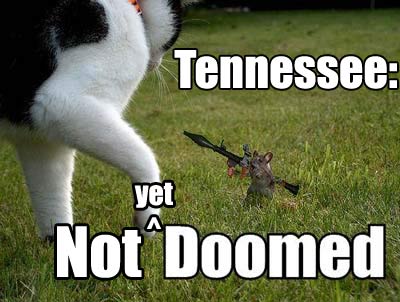