Up Close with the Eruption at Piton de la Fournaise 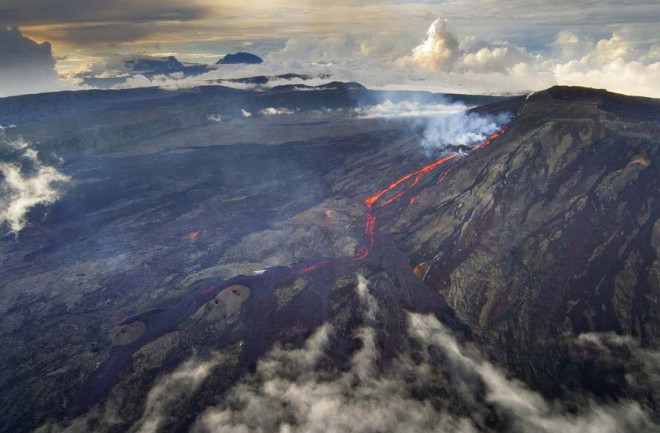 The eruption of Piton de la Fournaise seen on February 5, 2015. The network of new lava flows (dark black where cool and red where active) can be seen on the slopes of the volcano. Photo by Hervé Douris, used by permission. The eruption that started on Wednesday at Piton de la Fournaise on Réunion Island looks to be petering out. The latest views of the Piton du Bert webcam doesn't show any of the glowing lava flows or lava fountains that were active only 2 days ago, however the OVPF reports that harmonic tremor and gas emissions are continuing along with very minor lava, so the eruption has not totally ceased.

Lava flows from the February 5, 2015 eruption of Piton de la Fournaise diverting around cones from older eruptions. Photo by Hervé Douris, used by permission. Even if the eruption didn't have the longevity of something like Holuhraun in Iceland, it was an impressive event. The lava was able to build a small cone and a fairly impressive lava field during the course of the eruption (see above). Photographer Hervé Douris got some great images of the eruption from an aircraft that show the network of lava flows flowing down the slopes of Piton de la Fournaise, some getting diverted by cones of previous eruptions (see above). Volcanologists on Réunion Island attempted to sample the lava today as well, but conditions didn't allow for the collection yet.

Fissures erupting lava during the February 5, 2015 eruption at Piton de la Fournaise. Photo by Hervé Douris, used by permission. You can get a clear sense how the lava just flows out of new fissures (cracks) that form on the volcano before the eruption starts (see above). This is all part of the sequence of events related to Hawaiian-style volcanism. If the eruption persists like we see at Kilauea or Holuhraun, the linear array of vents coalesce into a a few vents that focus the eruption, but at first, lava can erupt along the length of these fissures (in this case, about 500 meters).