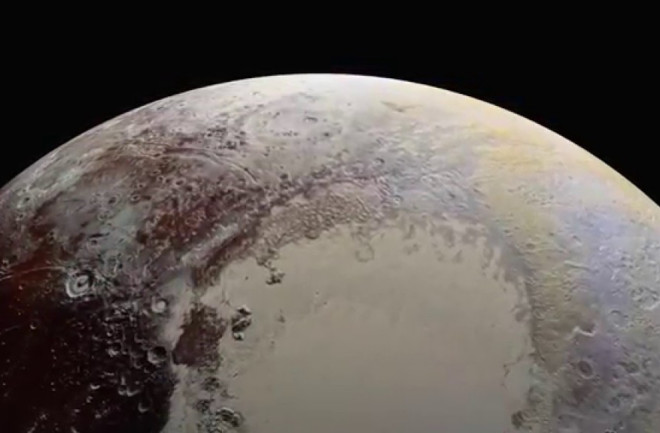 A cocktail of reflective ices forms Pluto's heart-shaped Sputnik Planitia (Image: NASA / JHUAPL / SwRI) When NASA’s New Horizons mission flew by Pluto last year, it sent back images that recalled a past era – a time when a few photos of initial reconnaissance could drastically change our sense of an entire celestial body. For The Moon and Mars, these initial glimpses happened decades ago; satellites of the gas giants, like Europa, Enceladus, and Titan were ready for their close-ups next. And after that? Well, it seemed as if the geologically active, charistmatic targets in our Solar System were spoken for. As illuminating as subsequent investigations have been – and to be sure, there are fundamental aspects of all of these bodies that still await discovery – at least we knew what kind of world we were dealing with. That all changed with Pluto. Expectations were low, given the outer Solar System’s reputation as an icy wasteland, but when initial photos showed potential cryovolcanoes and recent resurfacing, the questions came fast and furious. Many of them centered around the heart-shaped feature a thousand kilometers across located at 25 degrees north latitude. The heart, known more formally as Sputnik Planitia, is actually ice – a frigid brew of solid nitrogen, methane, and carbon monoxide – and several teams of scientists have been racing to figure out how it may have formed. One recent paper seeks to explain the higher gravity signal detected at Sputnik Planitia, contending that an ancient impact caused the depression, and that a subsurface ocean of liquid water welled up beneath the thinned crust. Because liquid water is denser than solid water ice, this greater cross section of liquid could account for the gravity signal. A different study led by Douglas Hamilton, a professor at the University of Maryland, has a different explanation, backed up by computational models of Pluto’s heat flux throughout its 248-year trip around the sun. The “dwarf planet” is inclined 120 degrees on its axis, creating an unusual seasonality that makes 30 degrees latitude (the equivalent, on Earth, of Houston or Cairo) the coldest regions on Pluto; so even without the massive crater proposed in other scenarios, ice would accumulate there. Thermal calculations constrain the latitude of the ice cap, but what about the longitude? Initially, the exact location may have been arbitrary, even if the prevalence of a single ice cap (as opposed to scattered patches) was predetermined. After all, ice is very bright, reflecting sunlight and cooling its surroundings. This positive feedback loop recruits more ice, and eventually nearly all of Pluto’s solid nitrogen, methane, and carbon monoxide would be located in a single enormous deposit. The ice cap would have drastically changed Pluto’s distribution of mass, and Hamilton’s models show that the only stable scenario involves Sputnik Planitia directly facing Pluto’s moon Charon or facing away. (It is oriented away from Charon, but it appears that that result was a coin flip.) Once situated, the ice cap was locked in place. Any movement away from 30 degrees latitude is limited by the continual condensation of ices back at that latitude, while longitudinal shifts are countered by the physical stability of the Pluto-Charon locked system. A full resolution of Sputnik Planitia’s features – and what they mean for a subsurface ocean – is still pending, but one thing has become clear: Pluto is a more dynamic, mysterious place than even the most imaginative scientists would have dared to believe.