Under the Volcano: How Crystals Record the Hidden Life of Lassen Peak and Chaos Crags 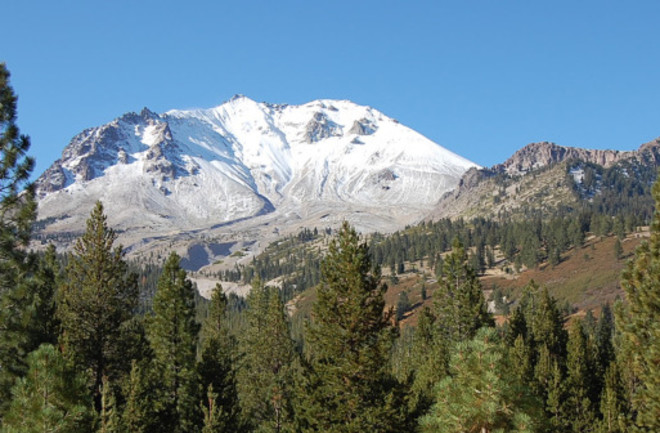 Erik Klemetti It's easy to see what's happening at a volcano when it's erupting, but what's happening during all that time when the volcano is quiet? A volcano spends a vast majority of its lifetime not erupting, but just because nothing is coming out the top it doesn't mean that there is nothing going on within the magmatic system below the volcano. For the last few years, I've been working on a project at the Lassen Volcanic Center in California and today, the first paper from this research comes out in

(an open access journal - so the article is free for anyone to download). It tells the tale of zircon collected from samples of lava erupted from Lassen Peak (see above) and Chaos Crags over the last 27,000 years and the events that the zircon record that we never see manifested at the surface. These zircon preserve the thermal and compositional state of the magma from which they are crystallizing and, most importantly, they can be precisely dated so we know when changes in the magma occurred. This means we can tell when that magma might have been heating and cooling and the state of that magma - that is to say, is the magma able to erupt or not? The take-home message: magma under Lassen Peak and Chaos Crags spends much of its life in "cold storage" (to steal a term from Cooper and Kent, 2014) only to be briefly rejuvenated when new magma comes into the system.

The Lassen Volcanic Center, with the three sample locations for this study marked. Landsat 8 image from Fall 2013. From Klemetti and Clynne (2014), PLOS ONE.

USGS/NASA, with processing by Rob Simmon (Planet Labs) This National Science Foundation-funded project at the Lassen Volcanic Center looked at the three most recent eruptions from Lassen Peak and Chaos Crags - the 1915 Lassen Peak dacite, the 1,100 year old Chaos Crags rhyodacite and the 27,000 year old Lassen Peak dacite (see above). Of those three eruption, the 1915 is the most famous and the 100th anniversary of that eruption is around the corner. However, it was tiny, coming in at just short of 0.01 cubic kilometers. The eruption at Chaos Crags was 100 times larger while the 27,000 year old eruption of Lassen Peak was over 200 times larger. Both of those latter eruption would have been impressive to see in action, with pyroclastic flows and lava domes growing to form much of the modern edifices we see today. We sampled lavas from each of these eruptions and extracted zircon (see below) from the lavas so we could date those crystals and analyze their trace element compositions (for zircon, any element other than zirconium, silicon and oxygen, which make up the structure of the mineral). Probably the most interesting observation we made from the data we collected from analyzing the zircon on the USGS/Stanford University SHRIMP-RG is that all three of these eruptions, themselves separated in time and space, sample very similar populations of zircon in terms of the crystals ages and compositions. This means that all three eruptions were tapping the same reservoir of crystals as the magma under Lassen Peak and Chaos Crags went from unable to erupt to BOOM. These weren't entirely new batches of magma rising under the volcano, but rather remobilization of old magma that had been cooling for tens to hundreds of thousands of years!

Three zircon from the 1915 dacite of Lassen Peak, seen in cathodoluminescence, showing the zoning in their composition.

Erik Klemetti Now, these zircon crystallized dominantly during a period from about 230,000 to 50,000 years ago, with most between 190,000-90,000 years ago - which happened to be a time when there were no eruptions. For 100,000 years after the Bumpass Sequence (a period of eruptions that span 315,000-190,000 years ago), nothing happened in the Lassen Volcanic Center. Yet, deep below the volcanoes, the magma left over from the Bumpass Sequence was slowly cooling and crystallizing - and the zircon that have been coughed up in eruptions since 27,000 years ago are the record of that cooling. However, it wasn't just cooling. Some zircon also record events where the magma heated back up (see below) for a brief periods of maybe decades to millennia. Some of those heating events actually occurred during that interval of no eruptions, so although no eruptions where happening, it looks like new magma was intruding under the Lassen Volcanic Center. It wasn't until 90,000 years ago that eruptions started back up again and zircon that have formed after 90,000 years ago show that continued heating (along with zircon happily cooling it parts of the system that haven't been warmed up yet). So our model is one where parts of the magmatic system under Lassen Peak and Chaos Crags are locally rejuvenation -- warmed back up and primed for potential eruption (which may or may not happen) -- while much of the system is left to continue to be in "cold storage".

Temperature recorded in zircon based on their titanium content, showing the "cold storage" conditions below 725ºC and the rejuvenated warmer zircon above 740ºC. You can also seen how many of the zircon crystallized during the period of eruptive hiatus, when the Lassen Volcanic Field was quiet.

Klemetti and Clynne (2014), PLOS ONE So these plucky zircon are preserving all this activity that is going up under Lassen Peak and Chaos Crags when on the surface, nothing looks like its happening. This likely the norm for most volcanoes in places like the Cascade Range, where magma that doesn't erupt slowly cools and crystallizes but is occasionally brought back to life briefly -- and if its heated up enough, an eruption can occur. This might solve the mystery of why it is very rare to find any seismic evidence of bodies of magma under most Cascade volcanoes (the missing "giant vats of swirling molten magma" that the media loves to use). Instead, you have a pile of crystals with some liquid magma between the crystals, somewhat like a sponge. It is only during those brief periods of rejuvenation that part of that "crystal mush" becomes able to erupt. Volcanic eruptions are then really ephemeral moments in the history of what is mostly magma just trying to cool down. This is very different than the long incubation periods it appears is needed to build giant eruptions like the Bishop Tuff from the Long Valley Caldera. This project is continuing, too. My current research students and I have collected zircon data from eruptions dating back over 600,000 years in the Lassen Volcanic Center. We're hoping to see how zircon record the evolution of a magmatic system over its whole history and how the thermal and compositions inputs (i.e., magma) changes. Hopefully I'll be able to update on this dissection of a major Cascade volcano in the next year or so! References