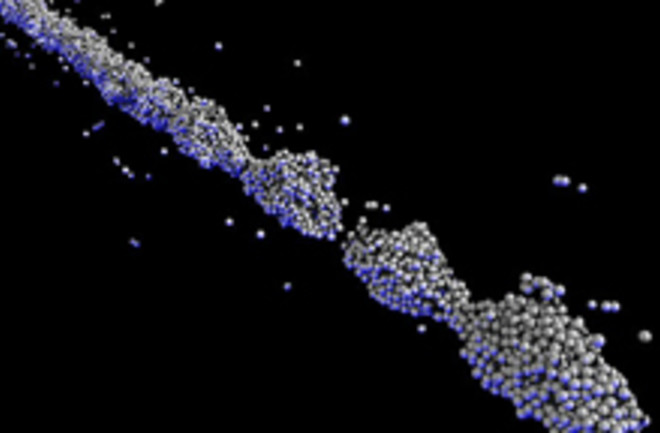 The sand that runs through an hourglass may look like a smooth and regular stream of particles, but if you had a big enough hourglass and a fancy enough camera, you'd see that those grains of sand behave in strange ways, not like a regular solid. In fact, the stream of grains begins to look more like a liquid as it falls, with the particles clustering together to form "droplets." For the study, published in Nature, researchers created a stream of tiny glass beads, each about the width of a human hair.

The team dropped an $80,000 high-speed camera in free fall with the glass to capture still pictures of the same three-centimeter-long section of the grain flow [Science News]

, and watched as the stream separated into distinct droplets over the course of falling three feet. In another experiment, researchers examined two individual beads under an atomic force microscope, and found that the attraction between the two can be explained by an extremely weak surface tension in the beads.

Previously, scientists thought grains did not display surface tension, or if they did, the effects were too small to change the flow of the particles. “But this experiment says that if we look very carefully, we find surface tension is almost zero, but it is not exactly zero” [Science News]

, says study coauthor Heinrich Jaeger. Jaeger is fascinated by the

behavior of granular materials, which for reasons unknown to science act sometimes as solids, or liquids, or gases — or something in-between. “You walk on the beach, and the sand supports your weight. Pick up a handful, and it runs through your fingers, like a liquid. But you can’t walk on water,” said Jaeger. “In the top of an hourglass, sand is this strange solid. It’s at the verge of being a solid; it flows through the middle as something like a liquid, and then it’s a solid again,” he said [Wired.com].

Besides probing the fundamentals of how matter behaves, the study does have practical applications.

Clustering is a key problem for transporting powders and granular materials, including fertilizers and pharmaceutical drugs, Jaeger says. Understanding how ultra-low surface tension can cause clusters could help researchers better predict how grains and powders will flow through pipes or even parts of the body, and to know when and whether the material will clump [Science News].