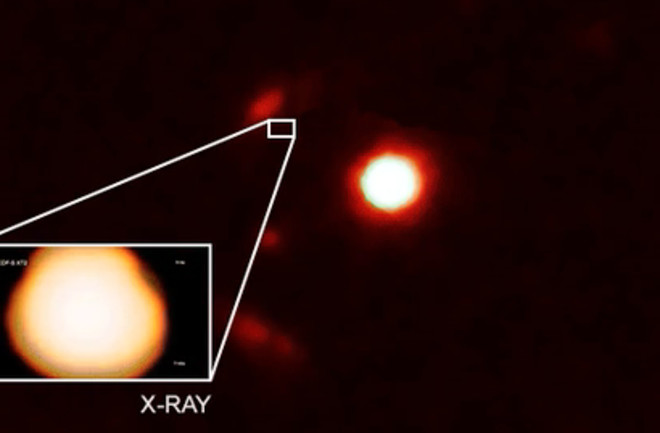 Chandra observations show the flare-up and subsequent dimming of XT2, which matches predictions for the signal from a pair of merging neutron stars and the birth of a magnetar. (Credit: X-ray: NASA/CXC/Uni. of Science and Technology of China/Y. Xue et al; Optical: NASA/STScI) In October 2017, astronomers announced the first detection of gravitational waves from the merger of two neutron stars earlier that year. The event also rung in the era of multi-messenger astronomy, as more than 70 telescopes observed the event’s afterglow in optical light, X-rays, gamma rays, and more. Now, an X-ray signal dubbed XT2 from a galaxy 6.6 billion light-years away has revealed another neutron star merger, which left behind a single, heavier neutron star with an incredibly powerful magnetic field: a magnetar. “We’ve found a completely new way to spot a neutron star merger,” said Yongquan Xue of the University of Science and Technology of China in a press release. Xue is lead author of a paper on the finding, published April 11 in Nature. Furthermore, he says, “The behavior of this X-ray source matches what one of our team members predicted for these events.”

Signals of a Merger

When neutron stars spiral together and merge, the event sends out signals across the electromagnetic spectrum, as well as gravitational waves. Depending on how the merger is oriented with respect to Earth, we might observe different types of light in the afterglow, such as gamma rays or X-rays. Thus, knowing the signs to look for, even in the absence of others, will help astronomers identify mergers even when gravitational waves cannot be detected. In the case of XT2, the Chandra X-ray Observatory spotted a surge of X-rays that flared and disappeared over the course of about seven hours on March 22, 2015. Though the signal was not identified at the time it was observed, it was discovered after the fact in the data, which were taken in a portion of the sky covered by the Chandra Deep Field-South — the deepest X-ray image ever obtained. The brightness and behavior of the XT2 signal matches predictions made in 2013 by study co-author Bing Zhang at the University of Nevada, Las Vegas, of the X-rays that should be unleashed when two neutron stars merge and birth a magnetar. Based on the X-rays observed, the team believes after the merger, the newly created fast-spinning magnetar briefly flared up and shone constantly in X-rays for about 30 minutes. But shortly after, the magnetar began losing spin energy by emitting a particle wind. Over the next 6.5 hours, the magnetar’s X-ray signal dimmed by more than 300x, ultimately fading from of Chandra’s view. [embed]https://gph.is/g/EGLdLpa[/embed]

Neutron stars are the end result of some massive stars; after a supernova, the star’s core collapses into a dense, hot ball of neutrons roughly 12 miles (20 kilometers) across, which spins rapidly and sports a magnetic field trillions of times stronger than Earth’s. Magnetars — of which only about 30 are known — are neutron stars with magnetic fields a thousand times stronger still, so about a quadrillion times Earth’s magnetic field strength. Astronomers still know little about these magnetic powerhouses, but they have been proposed as one origin of mysterious fast radio bursts. These are incredibly exotic objects that can’t be replicated in labs, so any chance to uncover more details about them and their properties is valuable. “We can't throw neutron stars together in a lab to see what happens, so we have to wait until the universe does it for us,” said Zhang. This merger unveils important information about both neutron stars in general, as well as magnetars specifically: “If two neutron stars can collide and a heavy neutron star survives, then this tells us that their structure is relatively stiff and resilient,” added Zhang.

But there are many ways to produce X-rays, and more than one possible formation scenario for magnetars. For instance, what if a single, massive star collapsed in a supernova, forming the magnetar? The team is confident XT2 came from a pair of merging neutron stars for a few reasons. The signal emanated from the outskirts of its host galaxy, which is where neutron stars are likely to be found. This is because the birth of neutron stars from supernovae often gives the neutron star a kick, launching them away from their original location and toward the outer regions of a galaxy. Additionally, the host galaxy itself appears to be a prime neutron star factory — it’s not making many new stars, which means it’s more likely that the signal came from the merger of two older neutron stars than a single young, massive star, of which there aren’t many to be found. So why didn’t XT2 produce gravitational waves? Actually, astronomers believe it did — but the event occurred before Advanced LIGO (the facilities that detected the 2017 merger) was operating, and was also too distant to detect. It is this fact that underscores the value of using other signals — such as the X-ray light Chandra did observe from XT2 — in place of gravitational waves to detect neutron star mergers. There are many reasons gravitational waves and even other types of light might not be seen from a merger, so identifying these events through other signals will allow astronomers to find more mergers to study these events and their outcomes, as well as the neutron stars that cause them and the objects that are left behind. With that in mind, the team is now scouring other Chandra data in the hopes of finding additional signals. Two neutron star mergers is twice as many to study as one, but it’s still a long way from the large group of mergers astronomers truly need to find definitive answers about these important events.