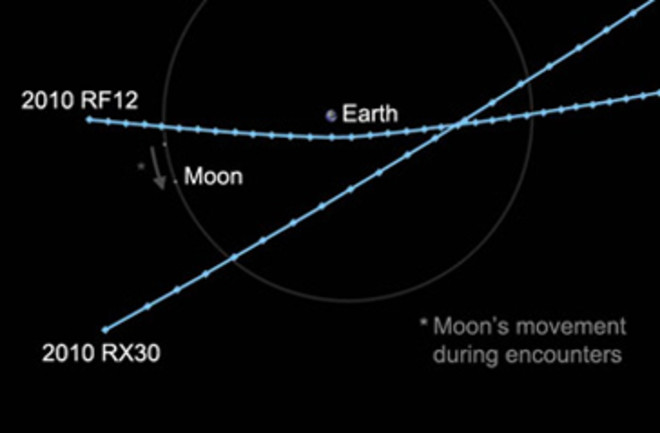 Zoom, zoom: Today two asteroids make close flybys of the Earth, passing inside the orbit of the moon. We're in no danger, NASA says, but these close passes are a reminder that the United States and the world need to figure out how we're going to catch an asteroid that could be on a collision course with our planet. The larger asteroid, called 2010 RX30, passed by this morning. The smaller, 2010 RF12, is due for a pass at 5:12 p.m. Eastern time today. RF12, which is estimated to be between 20 and 46 feet in diameter, will come within about 50,000 miles of the Earth.

The nearness of the afternoon asteroid should make it visible with a telescope. However, on its pass by the Earth it will be closest to Antarctica, CNN reports

, hindering the ability of North Americans to see it. NASA's sky-watchers spotted these two objects on Sunday. According to Donald Yeomans, the head of NASA's Near-Earth Object Program

, three days is actually pretty good warning considering how small they are, and our lookout capabilities.

"Things like this happen every day that we simply don’t know about because we don’t have the telescopes large enough to find them or surveys that are looking full-time," he said. "This demonstrates the system's working on some level, but we need larger telescopes and more of them to find objects that are coming this close." [CNN]

Indeed, NASA's ability to spot near-Earth objects (NEOs) lags behind the Congressional target: finding 90 percent of the NEOs that are 140 meters (about 460 feet) in diameter by 2020. Nature reports

that NASA's committee on what to do about this, the Ad-Hoc Task Force on Planetary Defense

, is preparing to release its report in October.

The White House Office of Science and Technology Policy has until 15 October to decide which agency will be responsible for protecting the planet from an asteroid strike. Members of the task force say NASA expects to be given part or all of that responsibility. To meet it, the panel discussed the creation of a Planetary Protection Coordination Office (PPCO) within NASA, with an annual budget of $250 million–$300 million. It would detect and track asteroids — and develop a capability to deflect them. [Nature]

The advisory panel also might recommend whether it would be better to develop a space-based telescope to watch for NEOs, or to invest in large ground-based telescopes that might cost less and last longer. Related Content: DISCOVER: The Asteroid Hunters

80beats: That Killer Asteroid You Heard About Yesterday? We Knew About It Last Year