Twin Stars Are Closer to Earth Than Thought 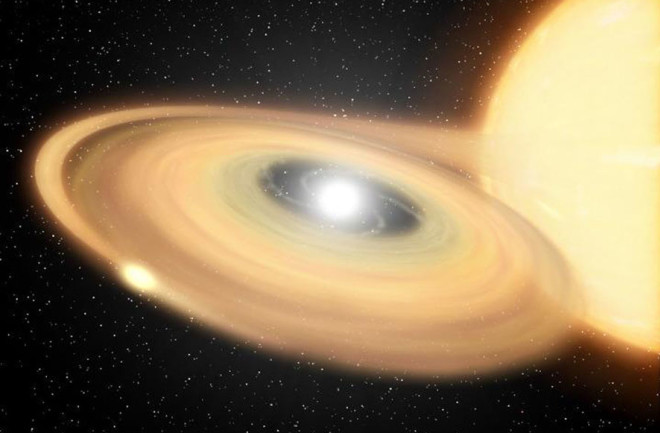 An artist's concept of Z Camelopardalis (Z Cam), a stellar system similar to SS Cygni. The white dwarf, the bright white object within the disk on the left, sucks matter from its more sedate companion star, on the right. The stolen material forms a rotating disk of gas and dust around the white dwarf. Credit: NASA/JPL-Caltech Imagine if you could see a car’s headlights from more than 20 miles away. Those must be some headlights! It might even throw your whole understanding of headlights into question – how could there be any this bright? But then, you realize that the car wasn’t 20 miles away, but just 2; instantly, things make sense again. This is how scientists solved an astronomical mystery involving not headlights, but a double star system named SS Cygni. It’s a kind of system known as a dwarf nova, which is made up of a white dwarf star and a red dwarf star orbiting each other. Over the years, astronomers had seen a variety of dwarf nova systems and thought they understood their mechanics: The more massive white dwarf pulls gas off its companion and into a flat disk surrounding the white dwarf. Occasionally (about every 49 days in SS Cygni’s case), the flow of material changes and causes instabilities in this disk, which causes a powerful outburst of energy. But Hubble observations of SS Cygni in 1999 and 2004 put it at 519 light-years away. At that distance, researchers thought that its outbursts were far too bright to fit with their understanding of these systems, calling the theory into question. But a paper published today in Science shows that the system is really just 372 light-years or so away, so the brighter-seeming outburst (and dwarf nova theory as a whole) makes sense again. The international collaboration of authors aren’t certain why their calculated distance was different from the previous one, but they do have a guess. In astronomy, one of the simplest ways to measure the distance of an object is to take advantage of parallax, the effect that results when you look at something from multiple points of view. Just as your thumb appears to jump around against the background if you hold it up and study it with each eye individually, a distant object will jump around against the background when seen from opposite points along Earth’s orbit around the sun. The reason for the discrepancy in distances might be what the various scientists used as the background over which SS Cygni “jumped.” The previous measurements used stars within our galaxy, but the new measurements used much more distant and uniform objects beyond the Milky Way. The authors also looked at the system’s radio waves, a more reliable and relatively error-free observation method compared to the previous optical measurements. On a citizen science note, the authors of this study were aided by the observations of the American Association of Variable Star Observers, a group of amateur astronomers. The group claims to have witnessed each of SS Cygni’s outbursts since its discovery in 1896. More recently they have alerted the team each time the periodic changes in the star system’s output began, allowing the scientists to study them in greater detail.