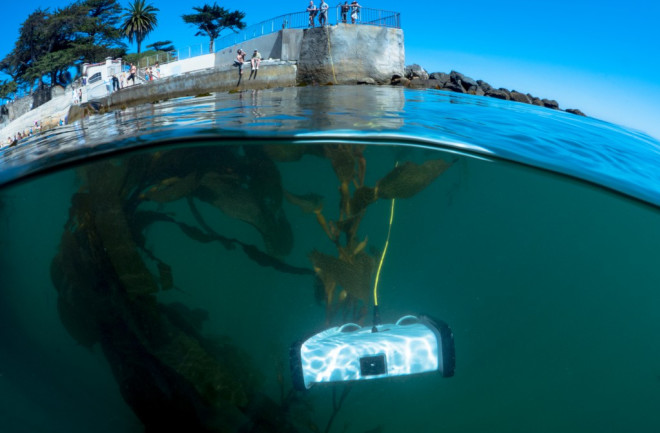 Trident, diving beneath the kelp. (Image: David Lang, OpenROV) Consumer drones have entered the mainstream recently, turning casual tinkerers into aerial cinematographers. With the launch of its latest low-cost submersible robot, named Trident, OpenROV is hoping to do the same with the underwater realm. Trident looks a bit like a desktop hard drive, sleek white plastic with rubber side frames and a tapered, hydrodynamic body. It’s a substantial design upgrade from previous versions - which were reminiscent of a shoe-box - attributable primarily to functional necessity. Industrial designer Mikael Silvanto was able to work within these engineering specs “and turn it into a truly beautiful machine,” explains OpenROV co-founder Eric Stackpole. Perhaps the most notable improvement is Trident’s speed. With a top rate of 2 meters per second, twice as fast as the previous version, the submersible provides an experience that early users describe as “like flying underwater”. Since its founding in 2012, OpenROV has been a key player in the democratization of underwater exploration. Its low-cost, relatively shallow-depth products form one end of the cost / usability spectrum, while streaming deep-sea video from more advanced scientific assets like the Okeanos Explorer, Nautilus Live, and the R/V Falkor form the other. The announcement of Trident, which is slated for release in about a year, has coincided with the launch of an associated Kickstarter campaign. The company started a few years ago on the legs of a different Kickstarter campaign, leveraging word of mouth and strong ties to the Maker community to build several iterations of low-cost underwater explorers. Today, with 11 employees and a substantial R&D investment, OpenROV is slightly in the red, but Trident might change that. The initial $50,000 crowd-funding goal was reached in five minutes; with more than a month left on the clock, the account is already well north of half a million dollars. This sort of obvious interest would likely lead many founders to court venture capital investors in order to scale up and take advantage of marketing and product development expertise. But this process frequently forces companies to relinquish strategic control, and Land and Stackpole are more interested in enabling a loyal, participatory community of explorers than maximizing the bottom line. “We could have gone directly to VCs and made the case that we were competing in the industrial ROV and autonomous underwater vehicle markets,” says Stackpole, “but coming back to Kickstarter gave us the opportunity to give our existing community a way to get involved early." The precise user profile of that community remains a bit murky. Fishermen, scientists, divers, and teachers have all gotten involved, “but the majority of OpenROVers so far,” says Stackpole, “fall into the ‘that’s so cool, I want one’ category, which is fun for us because that’s why we started building them in the first place. People are innately curious about the world and there seems to be a large interest in just seeing what’s down there.” That observational capability is clearer than ever with Trident, which can be programmed to fly transects over a given area, generating a continuous map of the seafloor. The Fiskardo Greece Expedition - which seeks to reconstruct the episode of an English bomber’s sinking during World War II - plugged such footage into a 3D model to map the distribution of the wreckage. When overlaid on an aerial image of the coast, it offers a stunning “window on the sea."

Plotting underwater maps on aerial images produces a full visual landscape (Image: Fiskardo Greece). Nonetheless, the best might be yet to come. Following the lead of aerial drones, Stackpole notes that using head-mounted displays to drive the ROV has its benefits, like a larger viewing area and an improved ability to block sunlight. The next step could include wearable tech and full virtual reality platforms to take the immersive experience to a new level. In a recent testing run, Stackpole and his team connected a Leap Motion optical sensor to the front of an Oculus Rift, creating a virtual cockpit. “It allows you to use hand gestures to interface with the vehicle in addition to gamepad control,” he says. “Picture the way people would often manipulate holographic menus and interfaces in sci-fi movies - now that’s real!"