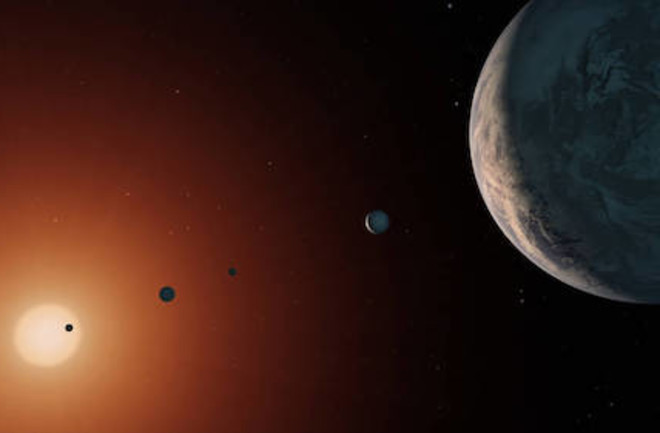 The seven planets that tightly orbit TRAPPIST-1 likely underwent an inward migration over time, influencing the state of water on the planets’ surfaces. (Credit: NASA/JPL-CalTech) The science community rejoiced when researchers discovered that three of the seven Earth-size planets orbiting TRAPPIST-1, a cool red dwarf about 40 light-years from Earth, are within the star’s habitable zone and could have flowing water on their surfaces. But while the presence of water undoubtedly increases the likelihood of habitability for these planets, it doesn’t automatically make them safe havens for life. In fact, an overabundance of water suggests just the opposite, and new research conducted by scientists at Arizona State and Vanderbilt Universities indicates that the TRAPPIST-1 system actually has too much water to support life. Each of TRAPPIST-1’s planets are roughly the size of Earth and are tightly packed together, with all of their orbits keeping them closer to their host star than Mercury is to the Sun. While the exoplanets are similar in size to Earth, measurements of their masses and volumes show that they’re much less dense. They’re too light to be rocky and, unlike other low-density planets of similar size, too compact to be primarily composed of atmospheric gas.

Everything you want to know about exoplanets and more in this free download from Discover.

“The TRAPPIST-1 planets are too small in mass to hold onto enough gas to make up the density deficit," said Arizona State University geoscientist, Cayman Unterborn, in a news release. "Even if they were able to hold onto the gas, the amount needed to make up the density deficit would make the planet much puffier than we see.” With rock and atmospheric gas ruled out, the research team determined that the system’s abundant component is likely water. However, just how much water is needed to make up the exoplanets’ masses remained unknown.

Researchers believe that TRAPPIST-1’s innermost exoplanets, labeled “b” and “c”, are about 15 percent water by mass, and outer planets “f” and “g” could be over 50 percent. Planets with an overabundance of water could hinder planetary life rather than enable it. (Credit: NASA/JPL-CalTech) To find out, Unterborn and Alejandro Lorenzo, another member of the research team, developed software called ExoPlex, which merged all of the available data for the TRAPPIST-1 system into one platform. By analyzing the host star’s chemical composition, along with the mass and radius of each planet, the software estimated that the two innermost planets (marked “b” and “c” on the image below) have less than 15 percent water by mass, while two of the outer planets (marked “f” and “g”) have over 50 percent water by mass. Keeping in mind that Earth is just 0.02 percent water by mass, the difference is pretty substantial. "We typically think having liquid water on a planet as a way to start life, since life, as we know it on Earth, is composed mostly of water and requires it to live," said researcher Natalie Hinkel of Vanderbilt University. "However, a planet that is a water world, or one that doesn't have any surface above the water, does not have the important geochemical or elemental cycles that are absolutely necessary for life." In addition to learning about TRAPPIST-1’s habitability (or lack thereof), the researchers also learned about the system’s formation and evolution. Stars like TRAPPIST-1 become their hottest and brightest following their formation, and they proceed to dim over time. When TRAPPIST-1 formed, so did its “ice line,” the boundary where a planet’s water starts to turn into ice. By examining planetary ice, the researchers determined that TRAPPIST-1’s ice line moved inward as the star aged and lost heat — but so did its planets. It’s believed that the planets initially formed farther away from the star than they sit now and later underwent an inward migration. Over time, they ended up twice as close to their host star as they were when they first formed, impacting which side of the ice line they fall on. The discovery gives insight into how planetary systems evolve over time, and how the physical state of a planet’s water can change during its host star’s lifetime. The hunt for habitable exoplanets continues to be exciting and ever advancing, with NASA’s upcoming James Webb Space Telescope (JWST; recently delayed) and the Transiting Exoplanet Survey Satellite (TESS) expected to uncover planets in never before seen detail. However, as these instruments come online, we’ll have to keep in mind that while some things look promising from a distance, a closer look could reveal too much of a good thing.