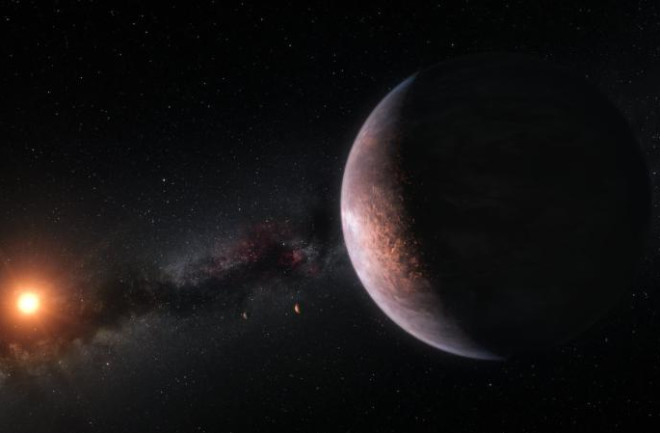 An artist's impression of the TRAPPIST-1 system. (Credit: ESO/M. Kornmesser) A series of papers out today gives us further insights into the TRAPPIST-1 system discovered in 2016. The seven planets that make up the system orbit a dim red dwarf star much smaller and cooler than our own Sun. The planets' orbits are much tighter than in our solar system, and they're all closer to their home star than Mercury is to the Sun. Three of them are thought to be in the "habitable zone" where liquid water could exist.

The system is relatively close, only 40 light-years away, and astronomers have been probing the planets and their star with an array of telescopes to learn about how TRAPPIST-1 formed and what conditions might be like on the seven planets. The latest research provides a much better estimation of some of the planets' densities and helps narrow down the possibilities for atmospheres there. Most excitingly, astronomers now say that water appears to be present in significant quantities on all of the planets, in some cases up to five percent of the planet's mass. Because conventional telescopes aren't powerful enough to get useful information about the planets directly, astronomers have to rely on other methods. To get a better idea of their density, and thus what they might be made of, the researchers tracked each planet's orbit. The TRAPPIST-1 planets are so close together that their gravitational fields tug on each other as they spin around their star. By measuring the power of these tugs, and putting that data into a sophisticated computer modeling algorithm, the researchers were able to get an idea of how dense each planet was. The picture it paints is rough, but the researchers found that the planets weren't dense enough to be made of just rock and metal. Volatiles—elements and compounds with low boiling temperatures—must be present, they say, and the best explanation is water. The amount varies, but some planets could potentially have more water than exists on Earth. Water could be liquid on the three planets within the habitable zone, the researchers say in a paper published in the journal Astronomy & Astrophysics. On planets further from the star, a layer of ice may cover the surface, and on the second planet from the star, a thick atmosphere of water vapor is likely present. "Densities, while important clues to the planets' compositions, do not say anything about habitability. However, our study is an important step forward as we continue to explore whether these planets could support life," said Brice-Olivier Demory a study co-author from the University of Bern in a news release.

Atmospheres could exist on several of the other planets closer in as well, and another paper, also published on Monday in Nature Astronomy, details researchers' efforts to peer into those gaseous layers with the Hubble telescope. When a planet passes in front of a star, some of the light will shine through its atmosphere, if it has one. If any gases are present, they will alter the light in a predictable way, allowing astronomers to see what molecules are floating around in the atmosphere. In this case, the researchers were looking to see whether the three planets in the habitable zone, as well as one other, had the kind of thick atmospheres that typify gas giants in our own solar system. Such an atmosphere would be rich in hydrogen and cloud-free, and would make discovering liquid water on the surface less likely. After analyzing the data from Hubble, the researchers found no traces of such atmospheres though, meaning that the planets are likely terrestrial like Earth or Mars. An atmosphere of some sort could still exist there, of course, but it's likely not as puffy and smothering as the kind that blankets planets like Neptune. These observations pushed Hubble capabilities to the edge, the researchers say. For better data, we'll have to wait for the telescope's successor, the James Webb Space Telescope, set to be launched in 2019. It should allow for the detection of heavier gases in the atmosphere and help to refine our search for life.