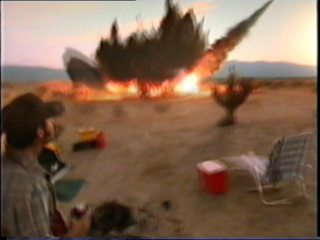 Is that image from real footage of a meteorite impact in a desert? Nope, but it's pretty convincing! I'm getting a bit of email about it. The video clip in question (Quicktime format) seems to show a couple of guys in the desert filming their friends in a Toyota Tacoma truck. One of them says, "What's that?", and you can see a smoke trail in the sky. Suddenly, a meteorite slams into the ground a few meters away, right where the truck was! There's an explosion, and the cameraman is knocked off his feet. There are a few sites on the web that post weird or funny video clips, and this video can be found on some of them. Most of them have trimmed the last few seconds of the video off. However, if you find a site with the complete version, you'll see the truck emerge unscratched from the explosion, and then a tagline appears: "TACOMA/METEOR-PROOF". That should make it clear this is just a put-on. Since this is the Bad Astronomy Blog, I should point out that meteoroids that small won't hit the ground with a huge bang, smoke, and fire. I wrote an article about this for space.com. Meteoroids that size slow down extremely rapidly high in the atmosphere, and take several minutes to fall the rest of the way to the ground at relatively low speed (maybe a few hundred miles per hour, compared to several thousand m.p.h. when they first hit the top of the atmosphere). Since they spend so much time way up in the atmosphere, where it's very cold, they have plenty of time to cool off -- especially since the heated outer layers of the meteoroid generally slough off while it's still moving rapidly. It's only really big meteoroids -- many meters wide -- that hit the ground while still moving quickly enough to generate heat. And even then it's no guarantee: while the impact that created Meteor Crater in Arizona was from the impact of a chunk of iron about 100 meters across, the explosion in Siberia in 1908 was an airburst, a rock that exploded many kilometers above the surface. So composition matters as well. Note that I wrote that space.com article back in 2002. No one ever listens to me, though, so I expect this myth of hot meteor impacts to go on a long time. At least until a small meteorite hits CNN headquarters or some other news outlet. Then they'll probably call it a comet.