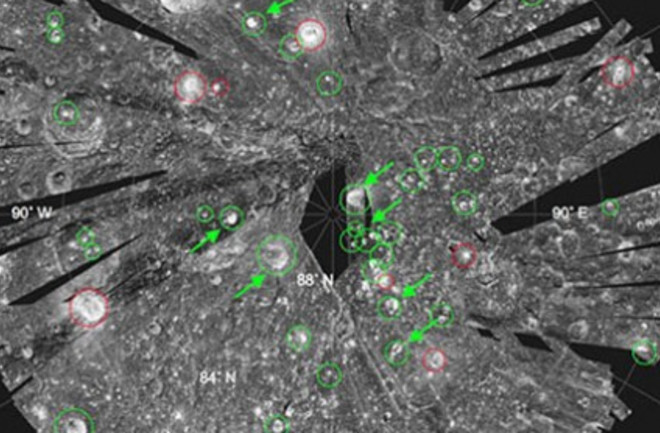 Water, water, everywhere! Radar results from a lunar probe have revealed that the moon's north pole could be holding millions of tons of water in the form of thick ice, raising the possibility that human life could be sustained on Earth's silvery satellite, NASA scientists said.

A NASA radar aboard India’s Chandrayaan-I lunar orbiter found 40 craters, ranging in size from 1 to 9 miles across, with pockets of ice. Scientists estimate at least 600 million tons of ice could be entombed in these craters [Wired].

Scientists estimate that this amount of water could easily sustain a moon base, or, if the oxygen in the ice was converted to fuel, could fire one space shuttle per day for 2,200 years. Last year, scientists found almost 26 gallons of water ice on the moon's south pole, by crashing a rocket hull into a cold, dark crater. The crash produced a plume of material that provided evidence of water ice on the moon's surface.

The craters which house the water deposits at both the north and south poles of the moon are extremely dark, cold, and most never catch any sunlight.

Temperatures in some of these permanently darkened craters can drop as low as 25 Kelvin (-248C; -415F) -- colder than the surface of Pluto -- allowing water-ice to remain stable [BBC].

Presenting the findings at a major planetary science conference in Texas, Paul Spudis of Houston's Lunar and Planetary Institute said the ice at the north pole could be buried under a layer of lunar soil, which may have prevented it from being vaporized even in crater regions that are exposed to sunlight. The findings, which will be published in the journal Geophysical Research Letters, are the strongest indication yet that the moon could sustain a human outpost. Says Spurdis:

"Now we can say with a fair degree of confidence that a sustainable human presence on the Moon is possible. It's possible using the resources we find there" [BBC].

But what a case of bad timing. The findings come just one month after the Obama administration proposed that NASA give up on its mission of returning to the moon by 2020.

So how does lunar water form? Scientists suggest that chemical reactions triggered by the solar wind, the fast-moving stream of particles that blows away from the sun, could be the source. In this method, the radiation would cause oxygen molecules already in the soil to acquire hydrogen. This means that there might not be obvious skating rinks of ice in the lunar craters, but instead so-called "adsorbed" water may be present as a fine film that coats soil particles. Other researchers have suggested that ice was delivered to the moon in comet and asteroid impacts.

But the findings are literally the tip of the iceberg, and lead to a host of further questions:

Researchers will have to keep investigating to find out. Related Content: