To the Depths of Titan

Astronomers learn how to study the seafloors of Saturn’s largest moon. 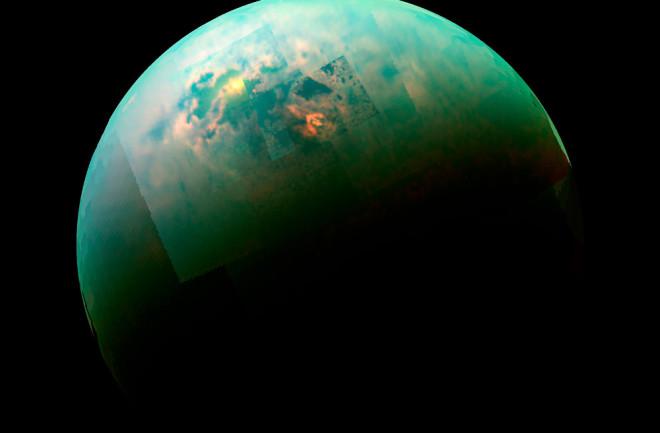 Lakes around Titan’s north pole glint in the sunlight in this mosaic of Cassini images. | NASA/JPL-Caltech/University of Arizona/University of Idaho

Sign up for our email newsletter for the latest science news
Cassini has explored the lakes of Saturn’s moon Titan for more than a decade. Lakes appear blue-black, and land appears yellow to white. | NASA/JPL-Caltech/ASI/USGS

Eleven years into its mission exploring Saturn and its moons, the Cassini spacecraft continues to make new kinds of discoveries. Most recently, it helped researchers map the bottom of the major seas and lakes on Titan, thanks to a new method for analyzing the venerable probe’s data.

The probe can now also measure the depths of some of those seas, thanks to a tweak in analyzing data. | Roen Kelly/Discover

RADAR, one of Cassini’s 12 science instruments, maps the surface of Titan, Saturn’s largest moon, when it flies near it by sending down microwaves and timing their return trip. Scientists had assumed Titan’s lakes would absorb the microwaves, eliminating any chance of measuring the moon’s seafloors. But in May 2013, Cassini passed over Titan’s northern hemisphere for another view of the surface, and the sea Ligeia Mare was along the path.

So Marco Mastrogiuseppe, a researcher on the Cassini team who had used instruments like RADAR to map subsurface water on Mars, decided to try something. He fed the Ligeia Mare data into his Mars software, again just assuming the microwave signal would die out as it passed through the lake’s mix of liquid ethane-methane. Instead, his code revealed two signal peaks: one from the surface’s reflection and the other 520 feet deep — the seafloor. “This is the first direct measurement of the depth of an extraterrestrial liquid body,” he says.

Lakes around Titan’s north pole glint in the sunlight in this mosaic of Cassini images. | NASA/JPL-Caltech/University of Arizona/University of Idaho

Testing out their new ability, Mastrogiuseppe and colleagues then analyzed 2014 data of Kraken Mare and 2015 data of Punga Mare, Titan’s largest and third-largest seas, respectively. They detected the seafloor at Punga, about 390 feet deep, but nothing at Kraken. It’s either too deep (at more than 650 feet), or it’s filled with a different, radar-absorbing liquid. Even though Cassini’s mission ends in 2017, scientists will continue to scour old data with this new capability.