To Planet 9 and Beyond: An Interview with Mike Brown 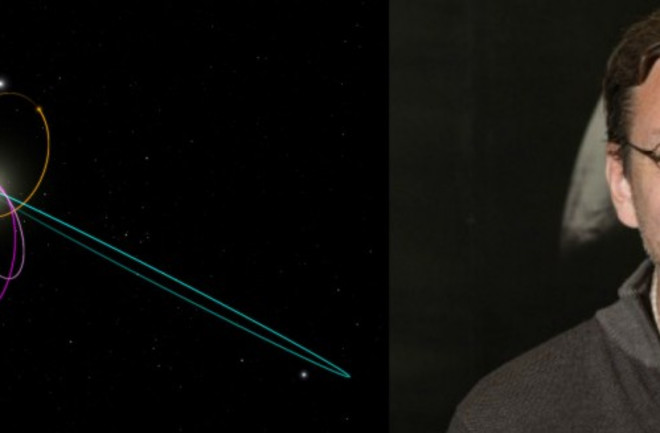 A man and his planet: Mike Brown alongside the most likely orbit of Planet 9. (Credit: Caltech) I mean no disrespect when I say that Mike Brown is a man on the edge. In fact, it is one of the highest forms of praise I can imagine. Brown, an astronomer at Caltech, has been one of the most aggressive scientific explorers of the dark, outer boundaries of the solar system. His campaign to extend human vision into the poorly understood region beyond Neptune led to the discovery of a whole menagerie of large object including Pluto's near-twin, Eris. That work led to the official demotion of Pluto from planet to "dwarf planet." Brown has no regrets (he proudly calls himself @plutokiller on Twitter), not because he considers Pluto unimportant but because he considers the whole vast region beyond Neptune so hugely important for understanding the evolutionary history of Earth and the rest of the solar system. Most recently, Brown and his colleague Konstantin Batygin tracked down strong evidence for Planet 9, a large planet--about 10 times the mass of Earth--orbiting at least 200 times as far from the sun as we are. The announcement made headlines around the world. But Planet 9 is still just a beginning. From Brown's perspective, the solar system we know is merely the part that happens to be easily seen, blasted with bright sunshine--a tiny fraction of a much larger, richer, and more complicated whole. The farthest thing we've seen so far is a 500-kilometer-wide chunk called V774104, about 15 billion kilometers out, but the sun's gravitational influence extends another 1,000 times farther still. What else circles out there in the darkness? Trillions of dormant comets: definitely. Planet 9: very likely. Other planets the size of Earth, Mars, or the moon? Completely new categories of solar-system bodies? No clue, yet. I caught up with Mike Brown to find out more about what we know, what we don't know, and how he is hoping to change the balance between the two. (For more astronomy news as it happens, follow me on Twitter: @coreyspowell.) First of all, in response to the absurd internet rumors, let me just say that I promise not to ask if Planet 9 will kill us all. Yeah, but it would be really funny if it then just did kill us. That would make us all look so stupid. [Note: it's not gonnna happen.] But seriously, how could a giant planet be buzzing around our own solar system without anyone seeing it? The problem is that reflected sunlight is a terrible, terrible thing for observing, because objects in the outer solar system get fainter by 1/r^4 [their brightness falls off as the square of distance from the sun, and again as the square of distance from Earth]. It’s a big solar system, and things get faint fast! When and how did the circumstantial evidence for Planet 9 become convincing to you? As early as early 2000s, there would be some thing going on in the outer solar system and people would say, "It must be a planet." Even I said, "It must be a planet!" We found Sedna on this crazy orbit, and I said there are three or four possibilities [to explain its orbit], and one is a planet. But the pieces never came together until the realization two years ago that all these funny objects we keep finding are actually lined up in one direction. Also interesting: All of these objects have perihelia [their closest point to the sun] that are higher than they should be; they’ve all been pulled away from the sun by something. You predict that Planet 9 is not aligned with the other bodies in the far outer solar system, but is in exactly the opposite direction. That surprised me--why would that be? We did not expect it! The first, obvious hypothesis is that there’s a planet that’s aligned with these objects [as suggested by Chad Trujillo and Scott Sheppard]. But when we ran the computer models, the planet would always destabilize these objects. Then we also noticed that it would capture anti-aligned objects, much to our surprise. So much to our surprise that we didn’t believe it at first. It seems crazy that the way you stabilize yourself is being on a crossing orbit with a 10 Earth-mass planet. But it’s crossing the orbit in a protected way, in a resonance so that the objects never come close to the planet itself. In fact, the only way never to come close to the planet is to be anti-aligned; if you are aligned, you spend a lot of the time kind of close. How are you going to find Planet 9 and prove that you are right? I hear you are booking time on the Subaru telescope. I wish "booking" were the right word! You apply, write a proposal to the allocation committee, wait. We would need something like 20 nights on the Subaru telescope to cover the most likely region where Planet 9 is hanging out these days. We know Planet 9 is near the most distant part of its orbit, which makes it relatively faint, and most of the place where we need to look is in the northern hemisphere. Subaru is the only big telescope in the northern hemisphere with a very large field-of-view camera. But 20 nights on Subaru is a substantial amount of time. We’re working with a large Japanese collaboration [also doing cosmology] to get bundled time. With luck the allocation committee will like it. People are very excited about finding and studying this planet, but it’s their telescope and they get to decide what to do with it.

Where's Planet 9? In these sky plots, black indicates plausible locations that cannot be fully explored by existing surveys. (Credit: Brown & Batygin) It seems like your search would need to cover nearly half the sky. How do you know even roughly where to look? When Planet 9 is closest to the sun, it’s bright enough that you could see it with some high-end backyard telescope. Even on the more distant parts, it would have easily been seen by existing wide-field sky surveys. We’ve looked at all of the data from surveys that have happened so far, and we’re able to rule out nearly all of the orbit except the most distant locations in the northern sky [where it is faintest, and also where it spends the most amount of time in its orbit]. What if you finish your search and find a big, fat nothing? There’s always a chance you get extremely unlucky, and the six times you’re looking where Planet 9 is it happens to align with a star and you miss it. But no matter where Planet 9 is in its orbit, it is well within the capabilities of Subaru, so I’d say our chances are quite good. Even if we don’t find it, we’ll be finding may more of the smaller objects that point to where it is, so we will be increasingly narrowing the search path. Still, it's possible that we’re just wrong and it’s not there. If we continue to find objects and they don’t fit the pattern that we think we see, that means we were fooled. I think the probability of that is minuscule, but it’s easy to prove us wrong. If anyone is going to prove us wrong we’d like to be the ones to do it, so we’re working hard at that, too. If you are right, what kind of an object is Planet 9? Where could it have come from, and how did it end up so far away? The discovery of the Kuiper Belt [beyond Neptune] 20 years ago started telling us about the history of the outer solar system. We started seeing things like Pluto with high eccentricity orbits in resonance with Neptune. That pattern immediately cemented the idea that giant planets migrated through the early solar system, which 20 or 25 years ago was considered crazy talk. To me that’s been one of the most profound things we've learned from looking at the outer solar system. We think Planet 9 is an ejected planetary core, [a partially formed planet] ejected from the Jupiter-Saturn region during a period of instability in the formation of the solar system. It could be there were not just five cores [Jupiter, Saturn, Uranus, Neptune, and Planet 9] but six cores, seven cores...we have no idea how many cores could have formed, and a couple of them got ejected early. All these things are possibilities. Finding Planet 9 will allow us to start exploring which of these makes the most sense. What else might be hidden out beyond the Kuiper Belt? There could be lunar-mass, Mercury-mass, maybe even Mars-mass things. I have always assumed that Pluto and Eris are not the biggest part of that population and we will see things 1.5 times or twice their size as we look farther into the objects that are being pulled around by Planet 9. The fun part is that the search for Planet 9 is exactly the way we search for these other objects. We are going to be reeling in many other small bodies of the outer solar system and reading their signatures so we can find out what else is going on out there.

The Large Synoptic Survey Telescope, under construction in Chile, is the next (last?) great hope for finding exotic new worlds in the far outer solar system. (Credit: LSST Project Office) Given how hard it is to observe the faint outer solar system, how will we ever see these things? We will eventually have enough time on Subaru to do the Planet 9 search. Our goal is to find it, and then study it to death over the next couple years. That's just the first step. Then we take a look at it with every telescope we can get our fingers on and see what the heck this thing is. Next there's the Large Synoptic Survey Telescope, LSST, which comes on line in 2022 or 2023. It will do an an all-sky survey and will fill in tens of thousands of objects in the Kuiper Belt. We’ll also be able to find hundreds if not more of the more distant objects like Sedna, which will be affected by things that are even farther out. I guarantee you that we will see patterns that we didn’t anticipate, and then we’ll start looking to see what’s causing these other patterns in the outer solar system. Around 200 to 400 AU [200-400 times Earth's distance from the sun, out to about ten times Pluto's distance] is the main region of what LSST can see. After LSST…there aren’t any other large-scale survey instruments planned. I don’t know what we’ll have to do. That’s a scary thing to think about, and I haven’t really been focusing on that question yet. So is that it? Are we really that close to the limits of vision in our very own solar system? We could start looking at long-period comets to see if we can glean any information from those guys. We honestly don't know what patterns to look for, which is why we haven't done it yet! I would desperately like to explore this part of the solar system and just see these things with my own eyes.