Steinn has a great report up from his recent visit to a Beyond Einstein Town Hall meeting. The Beyond Einstein program is a comprehensive NASA vision to explore gravitation, cosmology, and fudamental physics over the next couple of decades. I was a member of the original roadmap team, and we worked hard to craft a complementary set of missions that was both amibitious yet affordable; a lot of groups took one for the team, recognizing that their favorite proposals would weigh down the final document and make it look like a wish list rather than a realistic program. Congress and OMB liked what we put together, and made it a part of NASA's long-term budget. We highlighted five missions. Two had well-defined mission concepts: LISA to search for gravitational waves and Constellation-X to look at X-rays. Three probes were in development and would be competed to choose a final version: a dark-energy probe (which morphed into the joint NASA/DOE dark energy mission), a black-hole finder to map the X-ray sky, and a search for polarization induced by gravitational waves in the CMB. For future possibilities we highlighted two vision missions: a Big Bang Observer to directly detect the gravity-wave background from inflation, and a Black Hole Imager to resolve X-rays from right next to the event horizons of black holes. 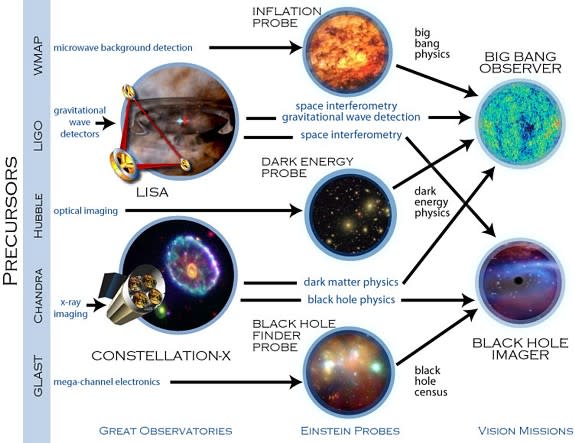 Subsequently, of course, NASA has decided that it has other priorities; primarily, visiting the Moon and Mars. That is too expensive to undertake while we're squandering money on actual "science," so some tough choices are going to be made. The current plan is to pick one of the above five missions (not including the vision concepts), and give it a budget slice. Maybe one of the others will get done, someday. So a high-powered National Academy committee is examining everything closely, deciding what to keep and what to kill. I'm sure that's not a fun job. Steinn's report gives a nice informal review of what the committee is hearing, and to a lesser extent what they're thinking. Gripping reading, in a somewhat morbid way.