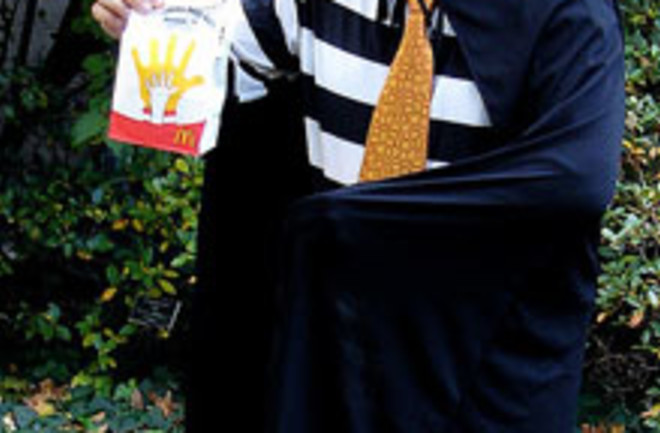 A McDonald's in the Dutch city of Rotterdam has decided to crack down on burglaries with a high-tech security system previously used in the city's jewelry stores. To catch anyone who makes off with the cash from the till (or a bag of Big Macs), the store's managers installed a device that stealthily sprays synthetic DNA on the thief. The system involves a small, strategically placed orange box that shoots out synthetic DNA when an employee pulls an unusual trigger: Removing a €10 bill from a special bill clip behind the counter not only activates the device, it also alerts the police that a robbery is in progress. The synthetic DNA spray is visible under ultraviolet light and contains markers that are unique to that location's device, allowing police to match a suspect with the locale. The security-conscious McDonald's advertises the presence of its system with a sign on the door reading, “You Steal, You’re Marked.” The New York Times explains that the effect of the device is, well, subtle:

The police acknowledge that they have yet to make an arrest based on the DNA mist, which was developed in Britain by two brothers, one a policeman and the other a chemist. But they credit its presence — and signs posted prominently warning of its use — for what they call a precipitous decline in crime rates (though they could not provide actual figures to back that up).

There have been misfires--some McDonald's employees have grabbed the special €10 bill when there was no crime in progress, causing the police to rush to the scene. And some customers have been "inadvertently" sprayed. Happily, those customers weren't accused of living lives of crime. The owner of the company that distributes the spray, the Rhine Group, rather depressingly attributed the technique's success to the ignorance of the McDonald's-eating masses. From The New York Times

Related Content: Discoblog: The New Happy Meal: A Burger With a Side of Cholesterol Meds

Discoblog: Fast Food News: It Boosts Impatience, and What Trumps KFC’s Double Down?

80beats: How Beer Bears Witness: Your Hair Shows Where You’ve Been Drinking

80beats: In Controversial Scent Lineups, a Dog’s Nose Picks Out the Perp