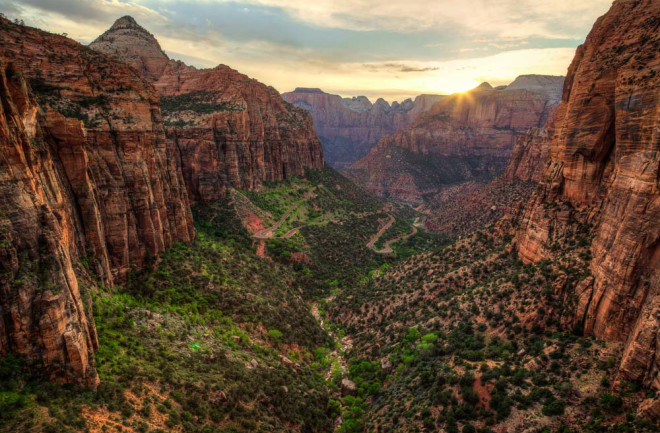 Zion Canyon in Utah flows out from the National Park's famed Narrows. Saturn's moon Titan has its own canyons with cliffs reaching nearly 2,000 feet tall. They're carved by rivers of liquid hydrocarbons, like methane and ethane. (Credit: Stephen Moehle/shutterstock)

The American southwest is littered with slot canyons – deep, narrow passages worn through by the erosive force of water. But there’s another place in the solar system with this majestic geology: Saturn’s moon, Titan.

“Titan’s canyons are wider, generally deeper, and have slightly more sloping walls (than Earth),” says Tracy Gregg, a geologist at the University of Buffalo in New York.

Gregg presented her research on Titan’s slot canyons last week at the Lunar and Planetary Science Conference in Houston with study co-author Susan Sakimoto of the Space Science Institute in Boulder. The canyons were confirmed in 2016 by NASA’s Cassini mission to Saturn. This latest paper studied whether Titan’s slot canyons formed the same way as slot canyons on Earth.

Titan is a strange world. It’s larger than Mercury, and it’s shrouded by a thick, smoggy atmosphere. That atmosphere lets Titan hold onto a vast network of seas, streams and more.

But the similarities to Earth are oddly superficial. Those liquid seas aren’t made out of water, but out of methane, ethane and nitrogen. And while there’s plenty of water on Titan, it’s frozen at such extreme temperatures that the water forms a bedrock of solid ice beneath many other ice formations. The rest of the water is trapped in an ocean far below the icy surface like the moons Europa and Enceladus.

Instead, Titan’s geology is shaped by those other flowing liquids, the methane and various hydrocarbons. And the moon’s icy landscape may be transformed into dramatic features by rivers flowing just a few feet deep.

Titan’s deep slot canyons were first suggested in a 2016 study of Vid Flumina, Titan’s version of the Nile River. Here, liquid hydrocarbons flow a whopping 249 miles (400 km) until they reach Ligeia Mare, one of Titan’s largest lakes. The river has formed canyons that reach some 1,870 feet deep (570 meters) and stretch more than half a mile (1 km) wide, with sloping walls. As Gregg and Sakimoto point out, these dimensions are consistent with slot canyons on Earth, though with less extreme slopes.

To see if the canyons on Titan formed similarly to slot canyons on Earth, Gregg and her colleague used computer simulations to test a wide array of erosion scenarios on Titan, helping to determine what some of these hard-to-suss-out features are.

“Given the morphologic similarities, it may mean that Titan’s slot canyons form in a similar way (to Earth): infrequent, heavy flooding,” Gregg says. “That doesn’t necessarily require a long time. These could be ‘active’ slot canyons on Titan.”

The same way Earth’s seasons are dependent on our planet’s orbit around the sun, Titan’s seasons are subject to Saturn’s orbit around the sun. That’s because the moon is tidally locked to its planet, so the same side constantly faces Saturn. This gives Titan an interesting confluence of factors that cause its seasonal behaviors. Seasons only change there every 7.5 years, which means Cassini didn’t get a chance to witness all four seasons. So we don’t know enough to figure out when and where this flooding might come from.

Further investigation of these features would require a return to the Saturn system via an orbiter or lander — though some fans of Utah’s Zion National Park would likely be up to the challenge of hiking the slightly-less-Narrows of Titan. There is one potential mission there, known as the Titan Dragonfly, which would send a drone to fly through the thick atmosphere of Titan, studying the strange and rich geology of the planet-sized moon.

But sweeping through the canyons might prove a little dangerous. Still, we can dream.