GRB080319b, the explosion that shook astronomers by getting bright enough to be seen with the naked eye, is still going strong. Hubble snapped this image three weeks after the explosion: 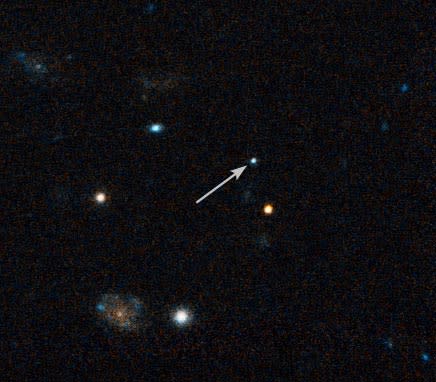 Incredibly, even after that time the GRB afterglow is still brighter than its host galaxy! This was truly an incredible event. I imagine any potential aliens in that galaxy -- at least between us and the burst -- are just so much vapor now. Of course, you can think of this event as having happened 7.5 billion years ago, so it's unlikely that there are any alien civilizations around to be destroyed (as I mentioned in an earlier post, heavy metals were rarer back then, so planets would probably have been deficient in elements like iron, calcium, zinc, and so on). Maybe whole planets-full of microbes were zapped, though. GRBs emit their light in beams like a flashlight, which is why they are so bright even from so maddeningly far away. But this one was so bright that astronomers were at first a little baffled. Was this really an astonishingly luminous event, or did the beam from the GRB happen to be perfectly aimed at us? Did it hit a bulls-eye? In fact, it's thought that this truly wasan incredibly luminous event intrinsically, and that was due to the beam being unusually tightly focused. It also was aimed right at us, making it look even brighter. What's fun to think about is how many other GRBs have been like this one? Probably not many, actually, so it was good for us that we happened to have the Swift satellite operating when the GRB went off. That allowed us to observe the explosion in near real-time with bigger and more sensitive telescopes, and in turn learn more about these incredible explosions on the dim edge of the Universe. And I'll add that this couldn't have happened at a better time for me: I was able to edit the proofs of my book to include GRB 080319b! I had talked about an earlier burst originally, but substituted this one in for it. I'm glad the timing worked out so well.