The biggest explosion yet from the Kilauea volcano propelled 1,000-pound rocks into the air, and sent ash rocketing 30,000 feet high 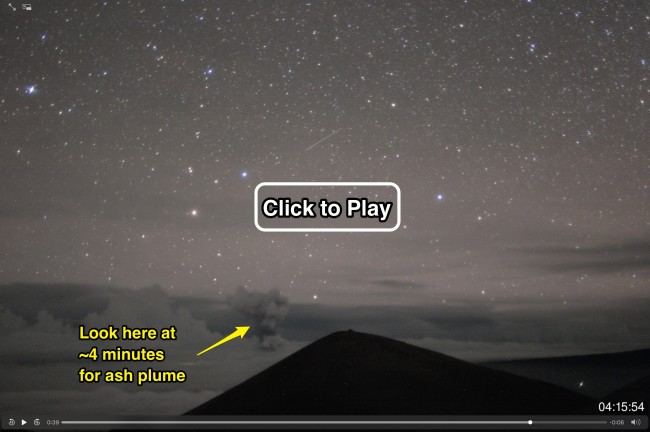 A timelapse video from a camera on the Gemini Observatory on the Big Island of Hawaii captured the ash cloud exploding high in the atmosphere from the Kilauea volcano just before dawn on May 17, 2018. The plume explodes above the cloud deck shortly after four minutes into the video. Lightning and meteors streaking across the sky are also visible. (Source: Gemini Observatory/Association of Universities for Research in Astronomy) The eruption of Kilauea Volcano on Hawaii's Big Island this morning sent an ash plume exploding about 30,000 feet high into the atmosphere. And as luck would have it, a camera was watching. The camera is located about 40 miles away on the Gemini North telescope atop 13,803-foot Mauna Kea. It's ordinarily is used to monitor the sky so that telescope operations can be handled remotely. The plume of ash from the massive eruption is visible in the video above as a dark puff shooting up above the clouds near the end of the time-lapse sequence. Look for it at about 39 seconds from the end, or a little after four minutes from the beginning. Here's how the U.S. Geological Survey described the eruption that produced the plume:

Just after 4 am this morning, an explosion or series of explosions from the Overlook vent within Halemaumau crater at Kilauea Volcano's summit produced a volcanic cloud that reached as high as 30,000 ft [above sea level] based on NWS radar information. The cloud drifted generally northeast and traces of ash fell with rain in the Volcano Golf Course, Volcano Village, and other areas immediately around the Kilauea summit.

Here's a full resolution static image of the ash plume acquired by the Gemini North camera at 4:16 a.m. local time: 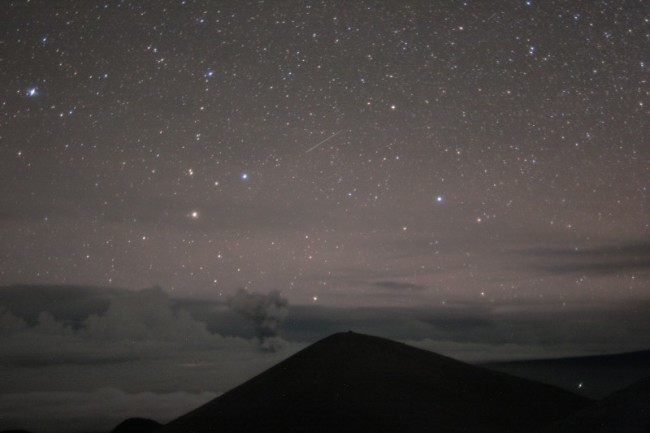 Please click on the image to open it in a new window, and then click on the plume to zoom in. (Source: Gemini Observatory/AURA/NSF) Scientists have been expecting the ongoing eruptions of lava on the Big Island to lead to a big explosion from the summit of Kilauea volcano. Here's why: Kilauea has been oozing lava since 1983. But during the past week, magma flowing underground from the summit burst through 20 fissures that opened within residential neighborhoods about 20 miles as the crow flies from the volcano summit. Huge volumes of lava and toxic gases poured from the fissures, prompting evacuation of about 2,000 residents and destroying at least 36 structures. All that magma flowing from the summit through the underground plumbing to the newly opened fissures caused the lava lake atop Kilauea to drop. When the sinking molten rock encountered ground water, a huge steam explosion ensued, propelling rocks and ash high into the atmosphere. Scientists call this a "phreatic eruption." 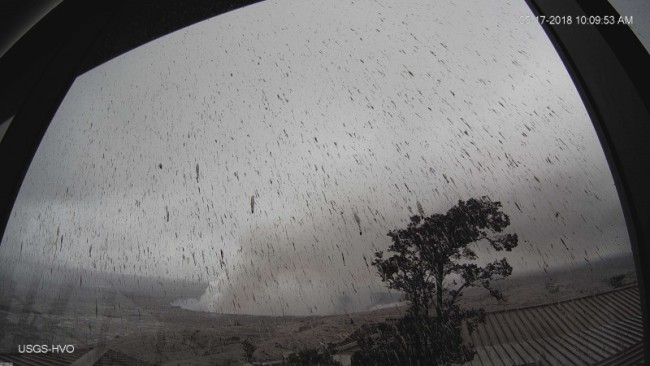 Following the eruption from the Kilauea summit crater, a webcam at the Hawaii Volcano Observatory captured this image of wet ash raining down. (Source: USGS) The eruption certainly was dramatic — it lofted ~1,000-pound rocks into the sky. But the ash that rained back down was mostly limited to the area around Hawaii Volcanoes National Park. That said, a series of new eruptions are very possible, according to the USGS. And an ensuing one could be even larger than today's eruption.