This Teeny, Tiny Galaxy is Hiding a Supermassive Black Hole 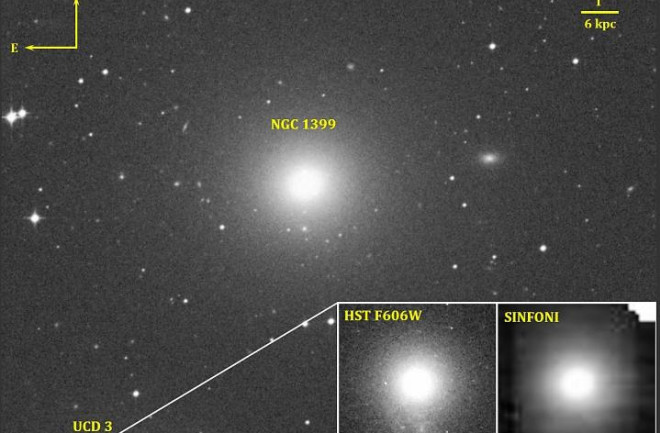 The tiny dwarf galaxy Fornax UCD3 (inset) orbits around a giant elliptical galaxy called NGC 1399. Astronomers used the Very Large Telescope in Chile to discover a supermassive black hole at UCD3's heart. (Credit: Courtesy of NASA/STScI/ESO/Afanasiev et al.) A small galaxy some 70 million light-years from Earth has been hiding a big secret. This week, astronomers announced they’d found a supermassive black hole (SMBH) lurking at the center of a galaxy called Fornax UCD3. It’s an odd place for such a giant black hole to survive. Supermassive black holes commonly thrive at the heart of large galaxies — including our own Milky Way — but they’re mostly absent in dwarf galaxies like UCD3. Dwarf galaxies are typically loose assemblages of stars, sometimes with intermediate black holes in the center. For instance, the Large Magellanic Cloud, the largest of the “dwarf galaxies” orbiting the Milky Way, lacks a supermassive black hole. This also typically makes dwarf galaxies diffuse. The Large Magellanic Cloud has a relatively paltry 30 billion stars spread across 14,000 light years. But this recently discovered system is what astronomers call an ultracompact dwarf galaxy. It packs a lot of stars in a very small space. This tiny galaxy is no more than 300 light years across, but has a whopping 100 million stars. For scale, the Milky Way is around 150,000 light years across with hundreds of billions of stars. Yet scientists were surprised to find a voracious black hole with the mass of 3.5 million suns at UCD3’s heart. That’s around three-quarters the size of Sagittarrius A*, the black hole at the center of our own galaxy. Astronomers aren't sure how supermassive black holes end up in ultracompact dwarfs. It could be that UCD3 is the remnant of a larger galaxy that was stripped of its stars by a close brush with another galaxy. Or, perhaps UCD3 formed when several super groups of stars joined together. Whatever its origin, UCD3’s black hole is one of only a handful ever found in these dwarfs, and it makes up 4 percent of the mass of its galaxy. Most supermassive black holes weigh less than one percent the mass of their galaxy. The discovery was made using the European Southern Observatory’s Very Large Telescope in northern Chile. Astronomers outfitted the telescope with a sensor that measures cosmic light in infrared. This allowed them to monitor how fast stars rotated around the galaxy. The scientists say they deduced the black hole’s presence from the way stars seemed to be spread. “To be able to say with complete assurance that this hypothesis is correct, we need to discover more supermassive black holes in ultracompact dwarfs,” lead author Anton Afanasiev said in a press release. Afanasiev and his colleagues at Lomonosov Moscow State University published their research in the Monthly Notices of the Royal Astronomical Society. We’ve only known of these tiny galaxies for a relatively short time, so discovering more examples could help astronomers determine if supermassive black holes are common or rare at the center of ultracompact dwarfs. Finding more could be a challenge because of their size. But ESO is up to the task—so we might expect a whole lot more in the coming decades.