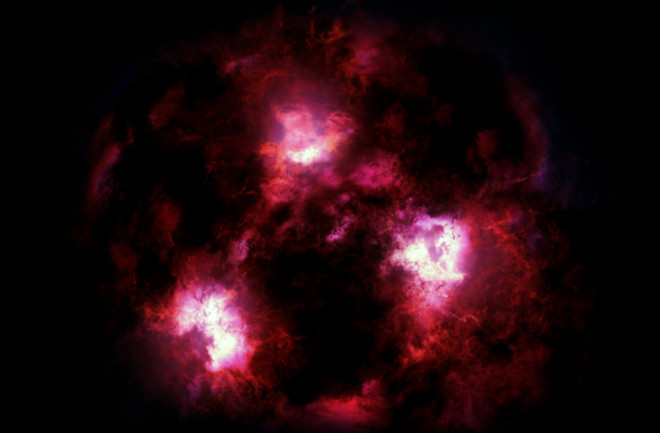 Our universe’s history began about 13.8 billion years ago with the Big Bang. When astronomers probe deep into space, they see parts of the universe as they were early in this history. That’s because it takes light a long time to travel vast distances. To find out how galaxies formed and evolved over time, astronomers look for the oldest, most distant objects they can see.

These observations reveal that massive galaxies appeared in the universe as early as 1 billion or 2 billion years after the Big Bang. But how were there already enough stars to make such large galaxies? The findings imply that early massive galaxies must have formed stars at incredibly high rates.

Now, a team of astronomers has spotted one of these early galaxies in the act of churning out stars. Their observations capture the galaxy, which is about the size of the Milky Way, as it was about 1 billion years after the Big Bang. However, the galaxy is creating roughly 300 suns’ worth of stars per year, while the Milky Way forms just one or two solar masses of stars each year.

The team says their find is something of a “cosmic yeti” because astronomers previously dismissed the idea that such monster early galaxies ever existed.

The researchers reported their find Tuesday in The Astrophysical Journal.

Christina Williams, an astronomer at the University of Arizona, was using the Atacama Large Millimeter/submillimeter Array to study another galaxy when she noticed an unexpected little blob in her images. When she and her team investigated further, they realized the blob was an extremely distant galaxy more than 12 billion light-years away.

Because the researchers stumbled upon the galaxy by accident in a fairly small patch of sky, they believe these quickly star-forming galaxies aren’t rare.

“The fact that we’ve been able to find one object and that it’s relatively common — that makes me excited for future surveys,” Williams said. “Hopefully, we will find more, and then we’ll be able to measure the formation histories of these things better with future data.”

The newly discovered galaxy is part of the puzzle of how such massive galaxies formed so early in the universe. Before long, Williams hopes, astronomers will find more pieces of the puzzle and create a more complete picture of galaxies throughout the universe’s history.