This Is Where Stardust Comes From 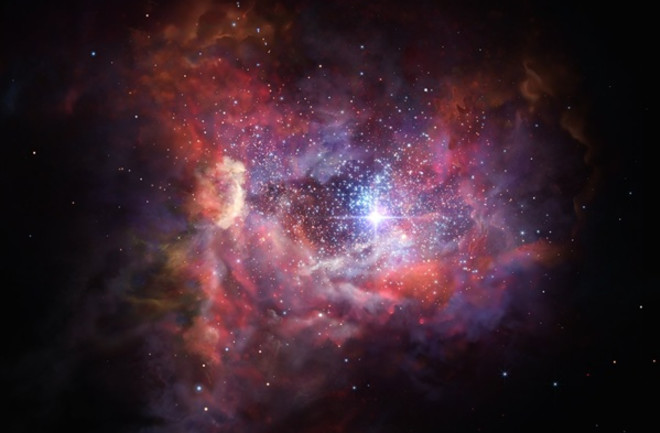 ALMA observations have uncovered an extremely young, dusty galaxy already polluted with the products of supernovae, as pictured in this artist’s impression. (Credit: ESO/M. Kornmesser) The Atacama Large Millimeter/submillimeter Array (ALMA) in the Chilean Andes has made several groundbreaking discoveries since it was brought online in 2011. Able to image the sky in millimeter and submillimeter wavelengths, ALMA can spot emission associated with molecular gas and dust, which are cold and can be difficult or impossible to see at other wavelengths. Using this ability, ALMA has identified dust and gas in a galaxy that formed when our universe was only about 4 percent of its current age. The galaxy is called A2744_YD4, and it’s the most distant galaxy ever found by ALMA. It sits at a redshift of 8.38, which is associated with a time when the universe was just 600 million years old. Redshift measures the amount by which a distant object’s light is stretched by the expansion of the universe. Objects with a higher redshift are farther away, and thus we are looking at them as they appeared in the past. In the very nearby universe, objects have a redshift of nearly zero; high-redshift objects, such as A2744_YD4 with its redshift of 8.38, are extremely far away (the exact distance depends on the expansion history of the universe). It’s also important to note that redshift is not linear — redshifts of 0-1 are considered relatively nearby, while redshifts of 8-9 are some of the farthest objects we can currently see as we look back to the very early universe. The cosmic microwave background was produced at a redshift of about 1,000.

A2744_YD4 is so far away that it appears as a tiny smudge sitting behind the rich galaxy cluster Abell 2744. Shown in red are the ALMA observations that allowed Laporte and his team to identify dust throughout the galaxy. (Credit: ALMA [ESO/NAOJ/NRAO], NASA, ESA, ESO and D. Coe [STScI]/J. Merten [Heidelberg/Bologna])A2744_YD4’s cosmological “timestamp,” as given by its redshift, falls within the estimated age range for the Epoch of Reionization, which occurred somewhere around a redshift of 10, when the universe was about 400 million years old. The Epoch of Reionization is when the universe’s first luminous sources — stars, quasars, and galaxies — turned on and ionized neutral hydrogen atoms (that is, knocked their electrons away). Neutral hydrogen is opaque to short wavelengths of light, which means that it absorbs these wavelengths easily so the light cannot pass through. As neutral hydrogen throughout the universe was ionized, however, light could finally travel vast distances. The detection of A2744_YD4 and its properties, which was made by an international team of astronomers led by Nicolas Laporte of University College London, is remarkable for several reasons. A2744_YD4 is full of dust. In the press release accompanying the announcement, Laporte explained that “the detection of so much dust indicates early supernovae must have already polluted this galaxy.” Supernovae are the end result of massive stars, which blow away much of their interiors explosively as they die. Among the material blown away is dust, which is made up of elements such as aluminum, silicon, and carbon, and is spread across galaxies by these explosions. This dust is an integral component of today’s stars (like our Sun) and the planets surrounding them. In the very early universe, however, this dust was scarce, simply because the process of its creation and dispersion via supernovae hadn’t had much time to complete. But in A2744_YD4, this process has apparently had enough time to progress. A2744_YD4 produces stars at a rate of 20 solar masses per year, which is a full 20 times the rate of our Milky Way’s comparatively paltry star formation rate of 1 solar mass per year. Based upon this rate, the group estimated that only about 200 million years were needed to form the dust seen in A2744_YD4. As a result, “we are witnessing this galaxy shortly after its formation,” according to co-author Richard Ellis of the European Southern Observatory and University College London. This detection, coupled with the age of A2744_YD4, helps astronomers to better pin down the life cycle — including the formation — of the universe’s first stars, called Population III stars. Population III (Pop III) stars theoretically contain only hydrogen, helium, and very little if any “heavier” elements, such as lithium. This chemistry makes Pop III stars extremely metal-poor, if not devoid of metals altogether. (As a note, astronomers typically refer to any elements heavier than helium as “metals,” regardless of their classification on the periodic table.) Pop III stars probably began developing about 100 million years after the Big Bang. The metals created inside these massive stars began to spread via supernovae, and as the metal content of the universe increased, Pop II stars began to form about 13 billion years ago. Today, these stars are found in the bulges and haloes of galaxies, and while they’re still considered metal-poor, they contain metal abundances much greater than the very early universe. The cycle of stellar birth and recycling continued, until about 10 billion years ago, Pop I stars began to form. Our Sun is a Pop I star, and the metals found inside it and our solar system can all be traced back to the same type of supernovae that spread dust (and metals) throughout A2744_YD4. In addition to identifying the dust from these early supernovae, ALMA also spotted emission from ionized oxygen in A2744_YD4 as well. This is the earliest detection of ionized oxygen in the universe, breaking a previous record also held by ALMA (from a detection made in 2016). All of this was made possible by the fact that A2744_YD4 sits behind a massive galaxy cluster called Abell 2744, also known as Pandora’s Cluster. The cluster is acting as a gravitational lens, magnifying the image from A2744_YD4 far behind it by about 1.8x and allowing astronomers to study this tiny, faraway galaxy. These observations of A2744_YD4 and its contents are just an early step in tracing the origins of the universe’s earliest — and perhaps first, and most massive — stars, as well as exploring the epoch when stars and galaxies first began to shine. According to Laporte, “Further measurements of this kind offer the exciting prospect of tracing early star formation and the creation of the heavier chemical elements even further back into the early universe.”