This Is What It Looks Like When Black Holes Collide

“Pictures like these are worth a billion pieces of data,” says legendary physicist Kip Thorne. 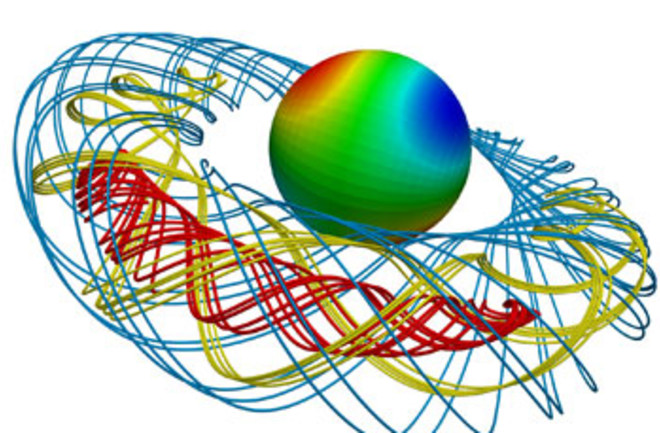 Theoretical physicist and black hole guru Kip Thorne says he gets about one great idea every 10 years. He recently unveiled what he considers the latest of these once-in-a-decade doozies: a new way to visualize how black holes stretch and bend the fabric of space-time [pdf].

The approach relies on imaginary lines of force called tendex and vortex lines—roughly the gravitational equivalents of the electromagnetic field lines that dictate the arrangement of iron filings around a magnet. Tendex lines radiate from all objects with mass; they describe how gravity compresses or extends space-time. Vortex lines surround rotating objects and depict how space-time becomes twisted, like water swirling down a drain.

Thorne and Cornell astrophysicist Robert Owen put the lines to work in a simulation of two black holes colliding, revealing for the first time how gravitational effects can combine to catapult the resultant giant black hole away from the site of the collision—a phenomenon that has puzzled astrophysicists for years. Thorne hopes the visualization will help researchers extract other useful insights from the mountains of numbers typically generated by computational models. “The human mind just can’t make sense of them,” Thorne says. “Pictures like these are worth a billion pieces of data.”