This Huge, Distant Galaxy Formed All Its Stars Superfast

A massive galaxy in the early universe had already finished making stars by about 1.8 billion years after the Big Bang, challenging astronomers' current models. 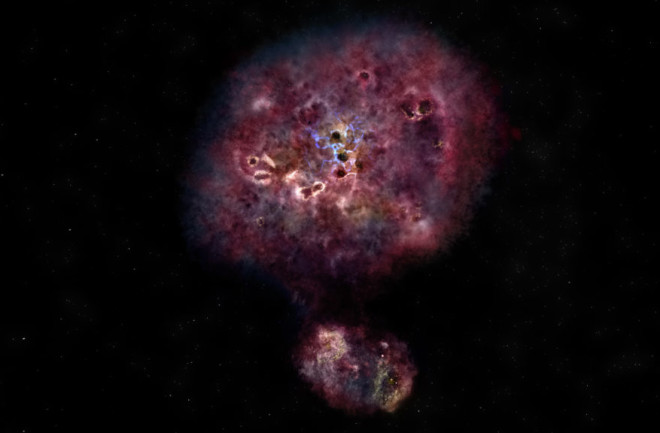 Illustration of what an early, massive galaxy may have looked like when it was full of dust and still forming stars. (Credit: NRAO/AUI/NSF, B. Saxton)

Extramassive galaxies are rare, though not unheard of, in the early universe. Now, a team of astronomers has identified a huge galaxy that had to have formed its stars superfast — more than 1,000 suns’ worth of stars per year at its peak — so that it was done making stars just 1.8 billion years after the Big Bang.

Astronomers typically expect that any large galaxies they find in the early universe would still have been forming stars at this time. The new finding shows they likely need to tweak their current models of how such galaxies form and evolve, and when they might finish making stars.

The researchers presented their findings in a recent paper published in The Astrophysical Journal Letters.

For astronomers trying to understand our universe’s history, figuring out how galaxies are born and grow is an ongoing puzzle. Part of that puzzle is understanding how large galaxies early in the universe grew to be so big in so little time.

To learn more about these early, massive galaxies, a group of astronomers including Ben Forrest of the University of California, Riverside, took detailed observations of several known galaxies that are especially bright and far. The fact that the galaxies are bright means they are also big, and the fact that they are distant means they appear as they were billions of years ago, in the early universe.

One galaxy, called XMM-2599, had roughly five times as much mass in stars as the Milky Way does today. The team found that this galaxy had finished forming its stars by 1.8 billion years or so after the Big Bang — earlier than they would have expected.

The galaxy must have formed its stars incredibly fast, the researchers said. At its peak of activity, XMM-2599 was probably forming more than 1,000 times the sun’s mass in stars each year for about half a billion years.

“This galaxy is kind of suggesting that the timeline needs to be pushed to an earlier point in the universe,” Forrest said.

XMM-2599 isn’t the only galaxy that’s challenged astronomers’ current understanding of how massive galaxies form early in the universe. Another team of astronomers recently found a massive galaxy — not quite as big as XMM-2599 — that seemed to have finished forming its stars by about 1.5 billion years after the Big Bang.

Understanding how these galaxies form — and how fast — will in turn help astronomers better understand how such galaxies go on to become part of the massive clusters of galaxies we see today in the local universe.