This Galaxy Has A Massive Ring of Gas Circling It

The ring is more than three times as far across as the Milky Way. 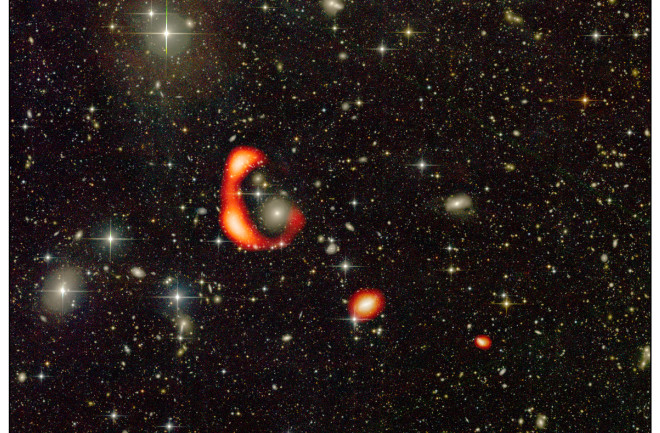 The galaxy AGC 203001 has a giant ring of hydrogen gas circling it, shown as red patches overlaid on a visible-light image of the galaxy. Two other nearby galaxies also have patches of hydrogen gas marked. (Credit: O. Bait (NCRA-TIFR/GMRT) & Duc (ObAS/CFHT))

Saturn may be the most famous celestial object sporting a flashy ring, but planets aren’t the only ones accessorizing. Entire galaxies, too, can have massive rings encircling them.

A team of researchers has found an enormous gas ring around a galaxy called AGC 203001 that’s a couple hundred million light-years away. The gas ring is bigger than usual for a galaxy, and also presents another mystery: Though it's made of the stuff stars form from, there are very few stars being made there.

The researchers presented their discovery in a recent paper in the Monthly Notices of the Royal Astronomical Society.

From Gas to Stars

In galaxies, stars tend to form in dense clumps of cool, neutrally charged hydrogen gas. Gas made of atoms that are electrically charged, or ionized, tends to be too hot and energetic to clump into dense-enough patches to make stars. So when astronomers see galaxies that have a lot of neutral hydrogen gas, they usually expect to see lots of stars forming as well.

But that wasn’t the case with AGC 203001. The researchers knew from previous observations the galaxy wasn’t forming many stars, even though it has a lot of neutral hydrogen gas. They decided to take a closer look using the Giant Metrewave Radio Telescope, an array of 30 radio dishes located in India.

They found this galaxy’s neutral hydrogen was concentrated in a huge ring around the galaxy nearly 400,00 light-years across. That's about three or four times the diameter of the Milky Way's starry disk.

“The distribution of the gas in the form of a large and diffuse ring was very surprising,” wrote Omkar Bait, an astronomer at the Tata Institute of Fundamental Research in India and an author of the new paper, in an email.

The Origin of the Ring

Astronomers think gas rings like this might form around a galaxy when it collides with another nearby. Typically, they’d expect such a collision to push gas together into denser clumps, encouraging new stars to form. But it seems as though that didn’t happen for AGC 203001.

In their paper, the researchers suggest several possible reasons for this. It’s possible that a collision with another galaxy actually heated up AGC 203001’s gas too much to clump together. Or it could be that the galaxy’s gas was just so diffuse to begin with that a collision wasn’t enough to clump the gas together.