This Day in Science Fiction History -- 2001: A Space Odyssey 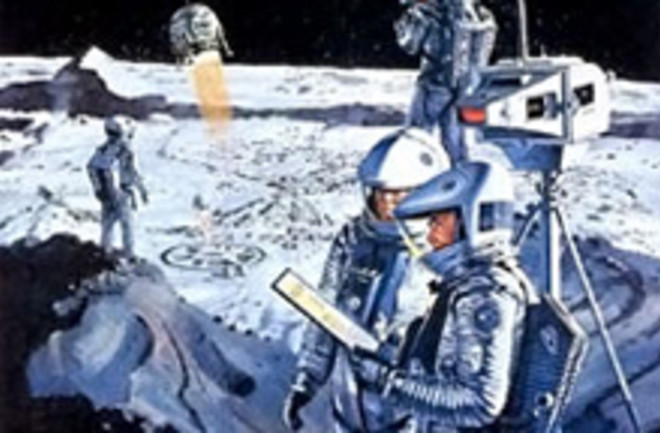 On this day in 1968, 2001: A Space Odyssey was released (watch the original trailer). Even though not everyone might agree (Phil, I'm looking at you), 2001: A Space Odyssey is one of the greatest science fiction movies of all time, both for it's ambitious story and its groundbreaking visuals. Even after four decades the special effects are holding their own (mostly -- there are a few obvious cardboard cut-outs in orbit), and the movie still sets the bar for its realistic depiction of space hardware, and life in space. Alas, the year 2001 has come and gone without moon bases, or privately operated orbital shuttles, but we're getting there -- the International Space Station may not have a Hilton, or rotate to provide artificial gravity, but at least it did just get its last major array of solar panels in place. And although PanAm Airways doesn't exist any more, let alone the Orion III Space Clipper, private spaceflight did take a step forward recently with successful test flights of WhiteKnight Two, the launch vehicle for Virgin Galactic's SpaceShipTwo private suborbital spacecraft. 2001: A Space Odyssey's influence on later science fiction is impossible to underestimate, and the balletic spacecraft scenes set to sweeping classical music, the tarantula-soft tones of HAL 9000, and the ultimate alien artifact, the Monolith, have all become enduring cultural icons in their own right. Still, for those barbarians who find the measured pace of the masterpiece a little slow, check out this awesome one minute version of the movie. In Lego.