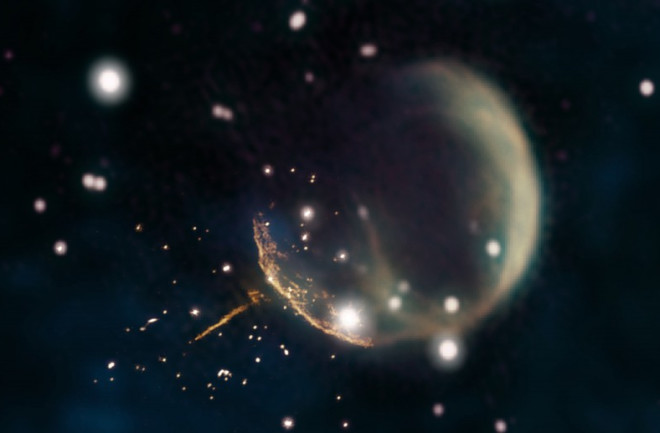 PSR J0002 is clearly visible with its bright radio tail pointing back toward the explosion that created it, the supernova remnant CTB 1. (Credit: Composite by Jayanne English, University of Manitoba, using data from NRAO/F. Schinzel et al., DRAO/Canadian Galactic Plane Survey and NASA/IRAS)

Astronomers discovered a pulsar, a kind of zombie star, racing across the galaxy so quickly that it could get from the Earth to the moon in six minutes flat. The dead star has a tail pointing back toward the remnant of a supernova that exploded 10,000 years ago. Astronomers suspected this might have provided the kick that sent the pulsar speeding off, but had to wait for 10 years of telescope data to make their case convincing.

A pulsar is the rapidly spinning neutron star left over after a supernova explosion ends the star’s normal life, leaving behind a dense core. They send off bursts of radiation, which their spinning turns into a lighthouse signal, alerting astronomers to their whereabouts and motion. This particular pulsar, PSR J0002+6216, spins 8.7 times a second and sports a tail of radio emission pointing directly at the expanding shell of debris from a supernova called CTB 1.

The tail gives a good visual clue as to what sent the pulsar skidding across the sky, but scientists also had to see if the timing worked out. PSR J0002 is now over 6,000 light-years from the center of that supernova explosion, which happened only 10,000 years ago. So scientists had to figure out if it could have traveled so far so fast.

A pulsar’s spin is very regular, enough so that astronomers can use them as cosmic clocks. But if the pulsar is in motion, astronomers will record those pulses arriving a little earlier or later than expected. By tracking PSR J0002’s emissions with 10 years of data from the Fermi Gamma-ray Space Telescope, they were able to clock the star’s speed at a whopping 2.5 million miles an hour, putting it among the fastest 2 percent of pulsars ever measured. Astronomers from the National Radio Astronomical Observatory and Naval Research Laboratory conducted the research, which is currently under review prior to publication in the Astrophysical Journal Letters. They presented it at the 17th High Energy Astrophysics Meeting this week in California.

Luckily, PSR J0002 isn’t coming toward us, and is instead speeding mostly across our line of sight. This is good news, because even the leftover core of a massive star still weighs more than our sun, and would wreak gravitational havoc as it passed by any other object. “If it were really between the moon and Earth, that would be the end of it,” says Frank Schinzel, lead author on the research. “If it were more than a few light-years away, we might see a nice show from neighboring solar systems’ disruption.”

The pulsar is going so quickly it will eventually leave the Milky Way entirely. Usually spotting pulsars outside the Milky Way is extremely difficult. But knowing that pulsars can be ejected from the galaxy by the explosions that create them gives astronomers a new population of objects to study and understand.