Think Explosions Are the Only Way to Form Calderas? Think Again 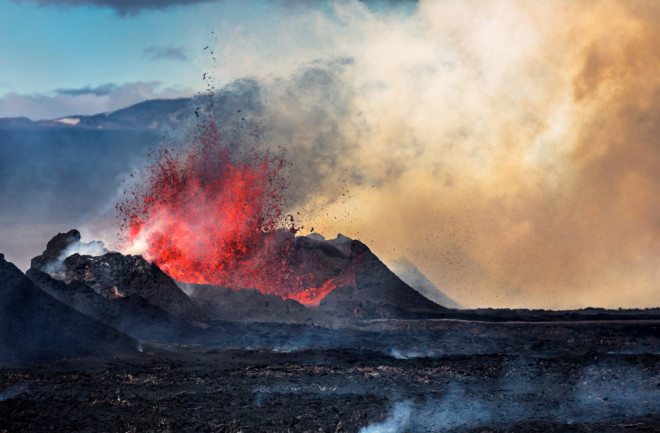 Lava and plumes from the Holuhraun Fissure Eruption by the Bardarbunga Volcano, Iceland. On August 29, 2014.Arctic-Images/Getty Images When a volcano erupts, stuff comes out of the ground. Most of the time, it isn't much stuff (and by "stuff", we're talking lava, ash, volcanic gases in varying proportions). But sometimes it's a lot. If you take that much stuff out of the ground underneath a volcano and spill it out all over the surface of the Earth, you suddenly have a bit of a support problem. All that stuff used to be holding part of the volcano or land surface up. Now, here it is up top, vacating a space deep underground and adding more weight pushing downward. That can sometimes lead to a collapse—and that collapse can be big. Out of those collapses we get calderas, the depressions formed when all the stuff that was underground goes missing and the Earth's crust slumps down to fill some of the space. The 2014-15 eruption at the Holuhraun lava field near Bárðarbunga in Iceland allowed geoscientists to watch a caldera-forming eruption in action. It actually turned out to be one of the largest in the last century—though it wasn't the sort of eruption that many people would expect to form a caldera. Now, calderas can form in many ways. Most volcano enthusiasts will think first of the large, explosive eruptions of sticky, silicic-rich magma. These massive events shoot out so much volcanic ash and debris (tephra) so rapidly that the volcano can't hold itself up anymore and it collapses into the empty space like a piston (see below). The two most recent examples of this type of caldera-forming eruption happened in 1991 at the Philippine's Pinatubo and in 1912 at Katmai during the eruption of Novarupta. These eruptions expelled 4 and 14 cubic kilometers, respectively, leading to collapses of ~2 and 5.5 cubic kilometers each.

The 4.5 by 3 kilometer caldera at Katmai in Alaska, formed during the June 1912 eruption at NovaruptaCyrus Read / USGS - Alaska Volcano Observatory At Pinatubo, the volcano collapsed on itself, creating the massive depression we see today. At Katmai, it was a little more complicated: The eruption came from a vent near Katmai (that we now call Novarupta), but the location of the magma meant that Katmai collapsed rather than the land directly around the place where all the stuff came out. The most recent caldera-forming explosive eruption in the lower 48 states was at what is now Crater Lake in Oregon. Prior to its cataclysmic eruption ~7,700 years ago, a volcano volcanologists have dubbed "Mount Mazama" stood where the lake is today. However, the massive eruption of Mazama released 13-15 cubic kilometers of magma and the volcano that was once over 3,000 meters (10,000 feet tall) collapsed in on itself, forming a lake that is ~590 meters (1,946 feet) deep. That means that the summit of Mazama collapsed over 8,000 feet (2.4 kilometers!) That eruption was so big that you can still easily find meters of pumice and ash over 50 kilometers from the volcano itself.

Schematic cartoon of the collapse of Mt. Mazama to form Crater Lake. The mountain slid down into the evacuated magmatic system like a piston.U.S. Geological Survey Now, I've probably given you the impression that calderas are formed only by these massive explosions. Oddly enough, it has been the more passive, basaltic eruptions with runny lava flows that have formed more calderas than their explosive brethren. One of those eruptions was the 2014-2015 eruption of the Holuhraun lava field near Bárðarbunga in Iceland. It may have been the largest ever observed of this style of more "relaxed" caldera formation. A recent study in Science by Gudmundsson and (many, many) others lays out the argument that the eruption of the ~1.4 cubic kilometers (0.33 cubic miles) near the Bárðarbunga caldera likely caused a collapse of ~1.8 cubic kilometers (0.43 cubic miles) as the magma drained from its reservoir under the caldera (see above). The basaltic magma for the eruption was stored ~12 kilometers (7.5 miles) under the Bárðarbunga caldera, but thanks to regional stresses, lava didn't erupt in the caldera. Instead, magma created an offshoot from the reservoir (called a dike) that headed off 47 kilometers (29 miles) to the northeast before erupting at what is now called the Holuhraun lava field.

Schematic cartoon showing the geometry for the collapse of Bardarbunga in Iceland. As the lava erupted at the Holuhraun lava field, 47 kilometers away, the floor of the caldera slid into the now empty space.Gudmundsson and others (2016), Science. Now, if you were following the eruption closely, you noticed that although the lava was coming out in the distant lava field, there were some big earthquakes going on at the Bárðarbunga caldera itself, some as large as M5.8. These earthquakes were happening on faults at the edge of the caldera called "ring faults" that are the boundary of the caldera (see above). As the magma was emptying to the lava field, the caldera floor was losing its support, so over the course of the next six months, it sunk 65 meters (~213 feet). That might not sound like much, but if you do it to the entire ~110 square kilometer (42 square mile) caldera floor, it adds up quickly. So, the collapse of the Bárðarbunga caldera floor during the eruption ended up being a big, slow-motion caldera-forming event. It was smaller in volume than the explosive Katmai and Pinatubo collapses, along with the collapse of Miyakejima during a basaltic eruption in 2000. It was the second-longest collapse event recorded, only behind the over 515-day collapse of Tolbachik in Russia during 1975-76. It does, however, set the record for furthest vent from the collapsing caldera. The close monitoring of the Bárðarbunga collapse means we have more data about this style of basaltic lava flow-driven caldera formation than ever. Considering that these style of collapses have occurred at Bárðarbunga, Piton de la Fournaise on Reunion Island, Miyakajima in Japan, Tolbachik in Russia, and Fernandina in the Galapagos during the last 100 years, it seems that such collapses are relatively common volcanic vents. They might not have the same explosive birth that forms the more well-known calderas at Crater Lake, Toba or Yellowstone, but they are an important component to consider at basaltic volcanoes when we think about potential volcanic hazards during future eruptions.