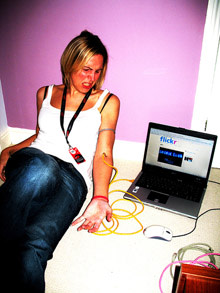 Internet addiction is reallyreal. In March, the American Journal of Psychiatry said that Internet addition is a compulsive-impulsive disorder and thus belongs in the Diagnostic and Statistical Manual of Mental Disorders. Good thing for newly-minted addicts that now there’s therapy for such a thing. The Illinois Institute for Addiction Recovery has developed the first rehab program for Internet addicts, using the twelve-step program that's been in place for over a decade. Treatment requires getting rid of an addict's home computer. Unsurprisingly, Internet addicts resist this. In fact, "the person who is addicted to his or her computer is going to have the same 'high' as the drug addict who is about to go see their drug dealer,"said therapist Tonya Camacho. Interestingly, Internet addicts tend to be divided by gender:

"The women who come here mostly have online shopping or chat-room addictions," said Coleen Moore, the coordinator of resource development at the Illinois Institute. "The men we treat [suffer] from Internet gaming, gambling and pornography."

South Korea considers Internet addiction to be one of its most serious public health issues. In 2006, about 210,000 South Koreans were declared Internet addicts, and 80 percent of them needed medication while the rest were hospitalized. About 10 million Chinese teenagers are reportedly addicted to the Internet, so in 2007, China decided to restrict computer gaming to less than 3 hours a day. It’s no LOL matter: The Center for Internet Addiction Recovery treats a range of addictions from cybersex and cyberporn to online affairs to online gambling to compulsive surfing. We took an Internet Addiction Test, a survey given by the center, and scored 30 points, making us “an average on-line user. [We] may surf the Web a bit too long at times, but [we] have control over [our] usage.” Worried that you might need therapy? Take the test yourself.

The Sciences"Nerd TV" is a Trend. These Are the People Responsible for It.
Recommendations From Our Store