I hear a lot about militant atheists, but the problem I see is that they're not militant. No violence, no (or very little) gun-totin', door-bang-downing, or even rootin' tootin'. Then there are these guys: 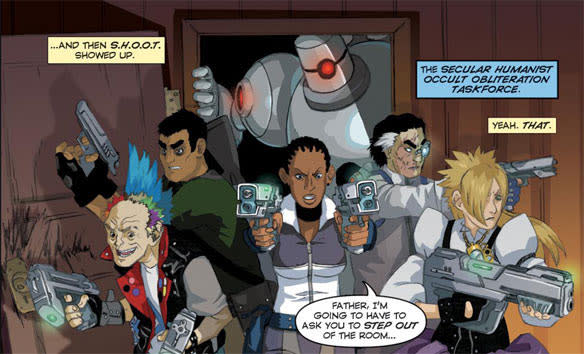 S.H.O.O.T is Secular Humanist Occult Obliteration Taskforce, a Dark Horse comic about real atheist militants: they attack demons and ghosts and paranormal things they don't believe in, but appear to exist anyway. I have to admit I'm intrigued, and I think I'll have to take a look when the comic comes out. The article about the comic brings up a point I've always wondered about: why are the worlds depicted in comics so much like the real one, even when the paranormal is real? If ghosts and demons and such actually existed, society would be a lot different than it is today. Think about it: if vampires existed, do you think it would've been a human who discovered blood transfusion? Why invent doors when you can discover how ghosts travel through walls? Why on Earth would you need microscopes if you could shrink yourself down to the size of The Amazing Atom? Wouldn't the history of slavery across the world be a little different if there were real live (um...) zombies? Sheesh. People need to think this stuff through. I can't keep doing all this for them!