These Exoplanets Are Forever Half Dark and Covered in Clouds 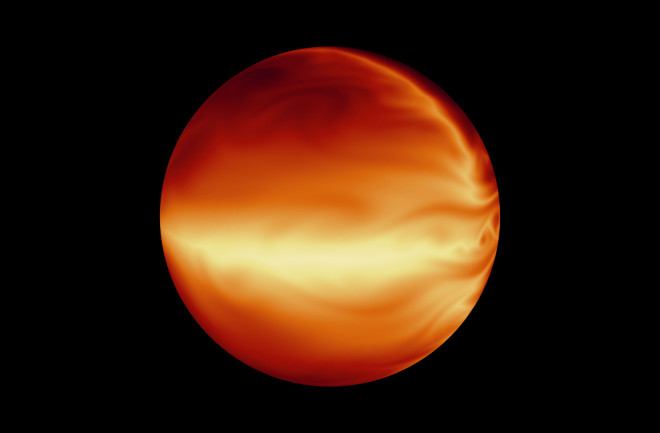 The Hot Jupiter known as HD 80606b is shown in this visualization. New research suggests that the nightside of every Hot Jupiter is covered in clouds, which regulates its temperature. (Credit: NASA/JPL-Caltech/MIT/Principia College)

“Hot Jupiters” exoplanets that resemble our own Jupiter, except for being, well, hot, have another side to them. We mean this literally: The planets usually don’t rotate, so one side is always facing their star, and the other remains in permanent night. A new study is suggesting that these night sides probably all look the same, no matter where you go in the universe. They’re dark and covered in opaque clouds.

These new findings are a result of a new study based on observations made with the Spitzer Space Telescope. Assistant astronomer Thomas Beatty of the University of Arizona, who led the new study, discussed the results at the 233rd meeting of the American Astronomical Society today (Jan 7).

The theory helps address a curious trend — the nightside of every hot Jupiter discovered so far was found to be at 1,000 degrees Kelvin. These planets vary greatly in dayside temperatures, so the alignment of nightside temperatures is a mystery.

“What we actually found is that KELT-1b looks extremely similar to its skinnier, hot Jupiter, cousins, with a day/night temperature difference right on the hot Jupiter trend. This caused us to take a look at the underlying temperatures on all these planets,” Beatty said in an email. Shockingly, with Spitzer observations, they found that all discovered hot Jupiters (and KELT-1b) have a nightside temperature of just about 1,000K.

It seems improbable that the temperatures on the dayside and nightside are able to balance out so well that the nightside of every single object in this category is at exactly 1,000K. “So, instead, we argue that clouds must be present in the nightsides to be causing all these planets to have the same observed temperatures,” Beatty added. How the clouds interact with the atmospheres of hot Jupiters is still largely unknown, but the researchers theorize that they’re helping to trap heat and keep temperatures uniform.

The study team doesn’t know everything about these clouds or these atmospheres, but from properties like cloud temperature, there are some things that they can surmise. “From that temperature, we can guess that they’re probably some sort of silicate clouds. This is sort of like gritty sand that’s been vaporized and is in cloud form on the night side,” Beatty said at the meeting.

Additionally, in answering questions at the end of the meeting, Beatty added that a hot Jupiter’s dayside would be likely hazy, not crystal clear, and the nightside would be much more opaque with clouds.

“It’s all very weird stuff for on Earth but for brown dwarfs and planets these are pretty standard things and we should have probably expected to see on these things,” Beatty added.

Going forward, the team is working to better observe these clouds and further explore this phenomenon. “We are in the process of getting Hubble observations to measure the spectra of these clouds directly on the nightside,” Beatty said at the meeting.

This study is publicly available in the electronic preprint journal arXiv.