There's nothing like ice lubrication for sliding large things into the Forbidden City. 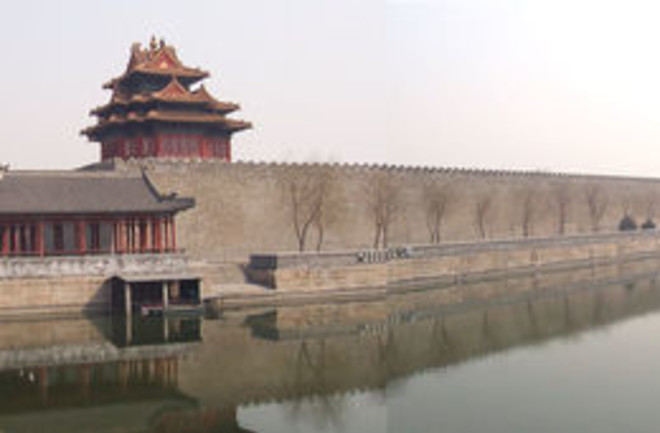 Sometimes I'm just amazed at how ancient civilizations got stuff done without today's computers and machine power. And there are a number of feats from more modern civilizations that we still don't understand. This detailed analysis describes one such situation, and deduces that the engineers of the Ming dynasty (~1500 AD) built water-lubricated ice paths on which to slide huge stones (up to 100 tons) for 40 miles. Pretty awesome!

Ice lubrication for moving heavy stones to the Forbidden City in 15th- and 16th-century China. "Lubrication plays a crucial role in reducing friction for transporting heavy objects, from moving a 60-ton statue in ancient Egypt to relocating a 15,000-ton building in modern society. Although in China spoked wheels appeared ca. 1500 B.C., in the 15th and 16th centuries sliding sledges were still used in transporting huge stones to the Forbidden City in Beijing. We show that an ice lubrication technique of water-lubricated wood-on-ice sliding was used instead of the common ancient approaches, such as wood-on-wood sliding or the use of log rollers. The technique took full advantage of the natural properties of ice, such as sufficient hardness, flatness, and low friction with a water film. This ice-assisted movement is more efficient for such heavy-load and low-speed transportation necessary for the stones of the Forbidden City. The transportation of the huge stones provides an early example of ice lubrication and complements current studies of the high-speed regime relevant to competitive ice sports." Related content: NCBI ROFL: Triple feature: Do the mystical healing powers of pyramids apply to rats? NCBI ROFL: The mystery of the missing Viking helmets. NCBI ROFL: Italian supermodels are hot. Romans with big noses are not.