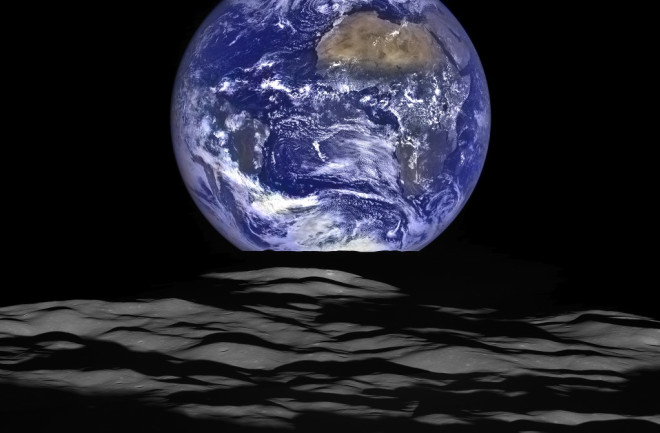 In this image, created with data acquired by NASA's Lunar Reconnaissance Orbiter spacecraft, the Earth is seen above the limb of the Moon, above Compton crater. (Source: NASA) After a bit of a blogging hiatus, I'm back — and I thought I'd lead off with the image above. I find it singularly striking. Make sure to click on the image to fully take in the beauty of the home planet. It consists of a composite of photographs acquired on Oct. 12, 2015 by NASA's Lunar Reconnaissance Orbiter. At the time, LRO was above the Compton crater on the Moon's far side. It looks like LRO captured a picture of Earthrise on the Moon — and that's how NASA has headlined it. But this is a bit of poetic license — because a stationary observer on the Moon actually would never see the Earth rising or setting. Here's why: Because the Moon's period of rotation exactly equals its period of revolution around Earth, it always shows the same face to us here on Earth. That's why there is a "near side" of the Moon (always facing us) and a "far side" (always facing away). So if you were standing on the near side of the Moon, you'd see the Earth — and its position would never change. But on the far side, the Earth would be over the horizon, not visible. Compton crater, visible in the image above, is on the far side of the Moon. So how is it that the Lunar Reconnaissance Orbiter was able to capture this beautiful image? That's an easy one: LRO wasn't on the surface — it was flying 83 miles above the crater, and as a result, Earth was just visible above the Moon's horizon.

Blue marble. (Source: NASA) As with the famous 'Blue Marble' photo taken by astronaut Harrison Schmitt during the Apollo 17 mission, the LRO image features Africa prominently. (Click on the thumbnail at right to see the iconic Blue Marble image at full-size.) Producing the LRO image was no easy trick. To pull it off required complex orbital balletics, two cameras, and sophisticated digital processing. The spacecraft — traveling faster than 3,580 miles per hour — had to be rolled to the side. Then it had to slew with the direction of travel at a very precise rate. This made it possible for the cameras to capture the data required to make one high-resolution composite image. And that in itself took a bit of technological wizardry. One of the cameras, called the Narrow Angle Camera, or NAC, produces high resolution imagery. But as its name suggests, the trade-off is that it has a narrow field of view. Oh, and it also operates in black and white only. Meanwhile, the other camera, called the Wide Angle Camera, or WAC, takes in a much broader field of view. And unlike its sibling, the NAC, it does operate in color. But it features much lower resolution. Complicating matters still further was the extreme dynamic range: The Earth was extremely bright, whereas the Moon was very dark. For the gory details on how imagery data from both cameras were combined to produce a single, high-resolution color image in which details are visible both in the shadows on the Moon and in the bright areas on the Earth, check out this explanation. (Geek alert!) All that processing might help explain why this image looks almost hyper-real, especially compared to the more natural-looking Blue Marble photograph, which was shot on film. Mind you, I'm not opposed to such digital processing — especially when it results in such a stunning image of the home planet.