Theoretically, Alpha Centauri should have planets 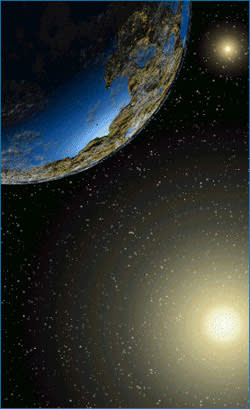 A new paper just published by a team of planet-hunters shows that theoretically speaking, not only can Alpha Centauri have planets, it should have them. A bit of background: Alpha Cen is actually a binary star, with one star much like the Sun (called Alpha Cen A) and the other a bit cooler (Alpha Cen B). A third star, Proxima Centauri, orbits very far out from the central binary. Alpha Cen is the closest star system to the Sun that we know of, at a distance of 4.3 light years, or roughly 40 trillion km (24 trillion miles). Since it's close, it's one of the most common stars used in science fiction. Planet formation around one star in a binary can be tricky; the disk from which the planets form can be disrupted by the presence of another star. However, a team of astronomers including Javiera Guedes and Greg Laughlin used computer simulations to see how planets could form in the Alpha Cen system specifically. They did what's called a Monte Carlo test, running the simulation over and over again with slightly different input parameters every time (like, disk density, composition, and so on). Remarkably, what they found is that they got a terrestrial (rocky) planet about the size of Earth orbiting Alpha Cen B every single time, and in many cases was at the right distance from the star to have liquid water. Holy Haleakala. A planet like that would be difficult to detect if it exists, but not impossible. In fact, not only do we have the tech right now to do it, but paper co-author Debra Fischer is looking for such a planet. It's possible that we may find such a planet in just a few more years. It's difficult to say what that would do for awareness of astronomy; I can't help but think it would make a huge splash. First, to find a planet orbiting the nearest star, and second, an Earth-like planet... wow. Still, since the result is still only theoretical, it's too early to get too excited about this. Well, maybe just a little excited. :) It's hard not to be. But we'll see soon enough.