"The world is getting warmer" 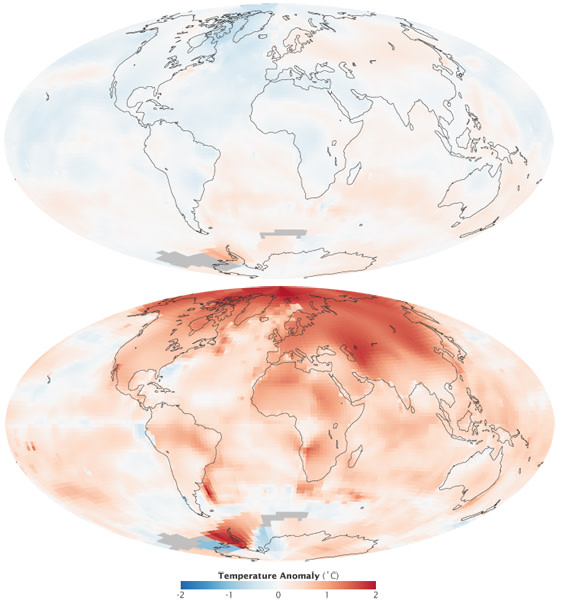 The world is getting warmer. Whether the cause is human activity or natural variability, thermometer readings all around the world have risen steadily since the beginning of the Industrial Revolution. According to an ongoing temperature analysis conducted by scientists at NASA’s Goddard Institute for Space Studies (GISS), the average global temperature on Earth has increased by about 0.8°Celsius (1.4°Fahrenheit) since 1880. Two-thirds of the warming has occurred since 1975, at a rate of roughly 0.15-0.20°C per decade. - Mike Carlowicz, on the NASA Earth Observatory site

The top map shows how much warmer the world was in the years 1970 - 1979 compared to the average temperature from 1951 - 1980. You can see that some parts of the Earth warmed and others cooled in the 1970s. The bottom map is the same, but only from 2000 - 2009 compared to 1951 - 1980. Those cooler spots are hard to find now, aren't they? Take a look at the map on the bottom, and allow your gaze to settle on the United States east coast. Look closely at Washington, DC. If you try -- squint if you have to -- you can see Congress there, rearranging deck chairs.