The Universe Is 10 Times More Vast Than We Thought 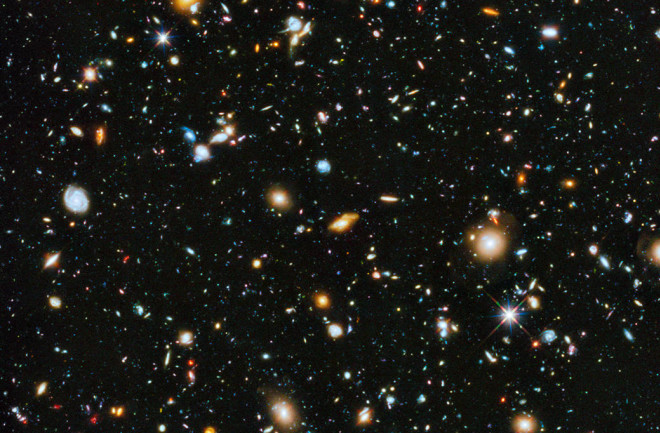 A composite of images from the Hubble Ultra Deep Field study. (Credit: NASA/ESA) The universe seems a little less lonely today. Astronomers from the University of Nottingham conducted a new survey of the universe's galaxy population and concluded that previous estimates lowballed the census by a factor of about 10. Using data from Hubble and telescopes around the world, as well as a new mathematical model, they estimate that there are ten times more galaxies in the observable universe than we thought; previous estimates put the number of galaxies in the universe at around 200 billion.

Looking Through Time and Space

To understand how the researchers accomplished their task, we first need to understand what they mean by the "observable universe." Because the speed of light is fixed, we can never get a true picture of what the universe looks like right now. As we look farther and farther away, we must necessarily look further back in time as well. So, in discovering how many galaxies exist in the observable universe, the Nottingham researchers haven't discovered how many galaxies exist right now, they've found out how many galaxies we would be able to see if our instruments were good enough. This may seem like a big caveat, but it's the only way can observe the far-flung universe. Being able to look back in time has its advantages, however. To reach their conclusion, the researchers looked at the rate of galaxy mergers throughout the universe. Most galaxies likely started small, and grew through a series of mergers with other galaxies as time went on. Because the researchers could see clusters further and further back in time as they looked deeper, they could compare the concentration of galaxies long ago to more recent times — relatively speaking. They found that galaxies appear to clump together as time goes by, forming larger structures while also reducing the total number of galaxies present. By running this rate backward, and extrapolating beyond what we can currently see, the researchers concluded that around 90 percent of the galaxies out there are too faint and too far away to view with current telescopes. This is what allowed them to drastically increase our estimation of the number of observable galaxies. The researchers released their paper Tuesday on the preprint server arXiv, it is set to be published in the Astrophysical Journal.

Why Can't We See Them?

This new galaxy census gives us an answer to a decades-old question known as Olbers' paradox. If there are so many stars and galaxies out there, why can't we see them all? Given the nearly unimaginable number of stars and galaxies out there, the night sky should be awash in light. In fact, there are so many galaxies that we should see one at every point in the sky. The answer, say the researchers, lies in the huge distances that separate us from most galaxies. Because the universe is expanding, the light that reaches us is subject to a phenomenon called "redshift." Similar to the Doppler effect that alters the pitch of a passing ambulance, as distant celestial objects move away from us, the wavelengths of light they emit appear to stretch out. Go far enough, and the light will redshift below the level discernible by the human eye, and eventually telescopes. In addition, galaxies and the interstellar space between them is filled with tiny particles of dust that absorb and filter out light. Some of this radiation shows up as background light, a faint diffuse glow of light that appears to have no source. The rest, however, disappears before it ever reaches us. The James Webb Telescope, set to launch in 2018, may be able to pick out some of these elusive stars. Until then, we'll just have to believe. [Update: 2:57 pm CST. NASA has released an updated version of their press release stating that the number of galaxies suggested by the study is ten times greater than previously thought, rather than 20. Our story has been revised accordingly.]