The Ultimate Cure for Hubris 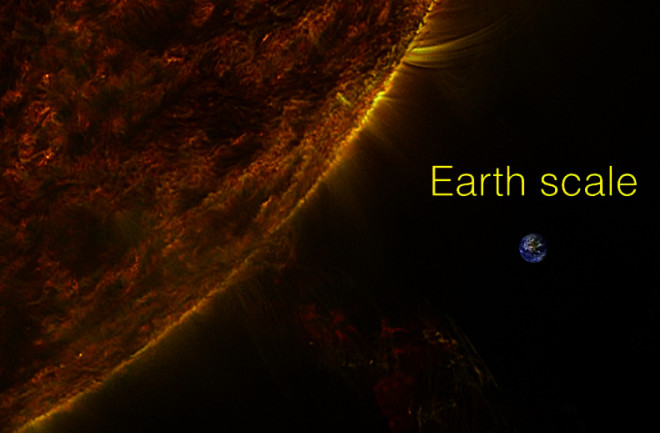 Source: NASA Solar Dynamics Observatory (Little SDO) Yes, I know, I'm obsessed with the Sun. And I swear — I really wan't intending to post another image of it for awhile. But after I visited the Solar Dynamics Observatory's "Little SDO" Facebook page today, I couldn't resist. I found a mind-blowing image there showing a big glowing splurge of plasma erupting from the Sun out into space. It's called a solar prominence, and you can see it in the image above. It is twelve and a half Earths in length, or ~160,000 km. The SDO spacecraft spied it last Saturday. That image is actually an extreme crop of the one I spotted on the Little SDO page, which you can see below. I cropped it to emphasize just how massive that prominence is. Here's the full image:

Source: NASA Solar Dynamics Observatory (Little SDO) If my eyes aren't deceiving me, I think the prominence would be almost big enough to swallow a good chunk of Jupiter. (Of course the images of the Earth and Jupiter were placed there digitally so that we could get a sense of scale.) Exactly what are solar prominences and how do they form? To get more of a visual sense of it, check out this video created with data acquired by SDO: http://youtu.be/rAOMJHEa0xg Here's how a NASA news release describes what we're looking at:

When a rather large M 3.6 class flare occurred near the edge of the Sun on Feb. 24, 2011, it blew out a gorgeous, waving mass of erupting plasma that swirled and twisted for 90 minutes.

The red-glowing looped material is plasma, a hot gas comprised of electrically charged hydrogen and helium. The prominence plasma flows along a tangled and twisted structure of magnetic fields generated by the sun’s internal dynamo. An erupting prominence occurs when such a structure becomes unstable and bursts outward, releasing the plasma.

I think I'll have a look at this imagery the next time I feel a bit of hubris coming on. Maybe it'll restore some humility...