The Tale of a Vintage Spacecraft That'll Never Make it Home 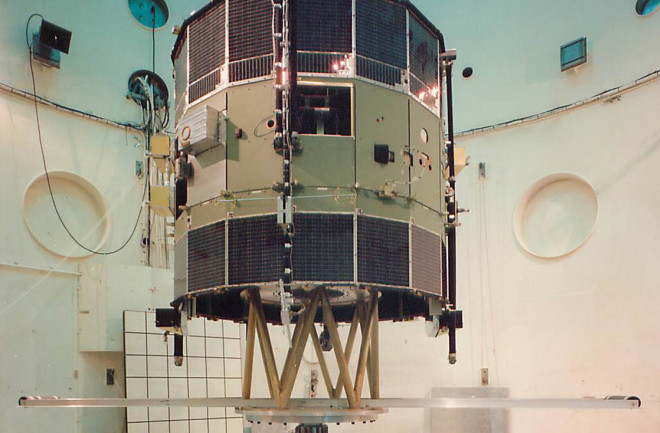 ISEE-3 before its 1978 launch. Credit: NASA Your mission, should you choose to accept it: Find and reanimate an ailing spacecraft, prevent it from hurtling into deep space, and guide it back to stable orbit near Earth. This setup could be the plot of a cheesy computer game, but it was actually the summer plan of a team of renegade spacemen. The group of ambitious volunteer-engineers made contact with a 1970s spacecraft, downloaded its data, and attempted to shift its trajectory homeward. They wanted to resume the craft's mission and siphon its data back down to Earth. Their initial plan, however, failed on Wednesday when they discovered the thrusters were out of juice—but in the wake of that setback they are altering, rather than abandoning, their plans.

The craft is the International Sun-Earth Explorer (for better or worse, nicknamed ISEE-3)—launched in 1978, back in the good old days when NASA actually sent metal objects into space. ISEE-3 was designed to study the barrage of protons and electrons flowing from the sun, but scientists also steered it into the tail of Comet Giacobini-Zinner in 1985. Soon after, in 1987, NASA commanded it to fire its last thrusts, putting it into a wide solar orbit that wouldn't whip it back near Earth until this year. Spaceflight engineer Robert Farquhar, who was on the original launch team, suggested at the time that on this 2014 approach, NASA could redirect the craft into Earth's orbit. A space shuttle could collect it, pat it on the back, and bring it back home, where they could close out the mission and download the collective knowledge of the craft's instruments. Farquhar obviously couldn't see into the future. In the real 2014, a) space shuttles live in museums, not in space, and b) NASA updated its communications system—the Deep Space Network (DSN)—15 years ago, meaning the agency now has no way to send commands to its older spacecraft. So though the DSN can detect transmissions from ISEE-3, it can't send any toit.

While there's some poetry to the idea of an antiquated craft drifting away into space, chattering radio waves and hearing nothing in return, Farquhar wanted more for ISEE-3. After finding the quiet radio pings, Farquhar learned that no one had pulled the power plug after the mission was officially over and, on top of that, some fuel was likely left in the tank. So he teamed up with a gang of engineers, software developers, and astronomy types to create the ISEE-3 Reboot Project. Two members—Keith Cowing, who runs the website NASA Watch (known for snarkily publishing internal memos and audit reports), and Dennis Wingo, the head of space engineering operation Skycorp—suggested a crowdfunding campaign. Through the site Rockethub, the Reboot Project collected more than $160,000 in donations. Which they are making good use of: They not only had to write hardware-mimicking code that reached back in techno-time to speak ISEE-3's language, they also—being a private project—need to pay for the time on the radio antennas that send commands and receive responses.

During the first stages of the project, things were looking up. Last week, the team used the Arecibo Telescope in Puerto Rico (made famous in the James Bond movie Golden Eye and the Jodie Foster classic Contact) to command the long-lost explorer to “spin up” and send some scientific data back to them. It did both. The team pulsed the thrusters 11 times, making the spacecraft rotate end-over-end. And ISEE-3 relayed back magnetic readings from a recent solar event. Turns out, it's been paying attention this whole time! But on July 8, an attempted “trajectory correction maneuver” didn't go as planned. The new, corrected trajectory was supposed take ISEE-3 out of its current orbit and bring it back toward Earth. But after just 63 pulses, ISEE-3 seemed to ignore the Reboot Project's carefully crafted commands. The zombie spacecraft was, it appeared, out of the nitrogen that pushes the hydrazine fuel into the thrusters. Without that push, ISEE-3 will have to stay in whatever orbit it's currently in. Maybe it will crash into the moon on its flyby. Maybe it will just go back into space deeper than the space from whence it came. On July 11, the team will use the Deep Space Network to locate ISEE-3 and figure out where, exactly, it's headed. But no matter what, it's never going to fly home.

The Need for Nostalgia

All is not lost, though. ISEE-3 still will make a close pass by Earth on August 10. We can wave. And from now until approximately three months from now, Project Reboot will be able to keep the craft company, tracking it and downloading its readings. Although that's not as cool as making it our next-door neighbor, no one would be talking to ISEE-3 at all without this project. The cosmic castaway would just wing by Earth, pinging the abyss and hoarding space-data we'd never see. So we're left with the question "Is it better to have tried and failed than not to have tried at all?" Cowing seems to think so. As he told SpaceNews on July 9, "We did stuff that was widely seen as impossible, improbable, and impractical. You need to focus on the absurd things that are possible.” And it's focused minds on the usefulness of the past. The relentless advancement of technology is good for Mars rovers and Netflix streaming speeds, but it also means we abandon still-useful gadgets. And magnetic readings from the sun are magnetic readings from the sun, whether they come from a silicon-encrusted modern craft or a disco-era one. In resurrecting ISEE-3, we’re stopping to consider what we've left behind. To be sure, this nostalgia is what privately funded programs are for, and not what should motivate federal space agencies. NASA should still move forward and do things like send landers to Jupiter to see if Europa Report was accurate. But the U.S. space program is scaled back from what it used to be. We have a collective longing for a good space triumph. Perhaps in addition to the “era of private spaceflight,” this present time is the “era of space nostalgia,” when we remember fondly how things used to be—even if we weren't alive then. And, sometimes, when we're feeling audacious, try to get them back.