The Sun's Colossal Glowing Loops, Up Close and Personal 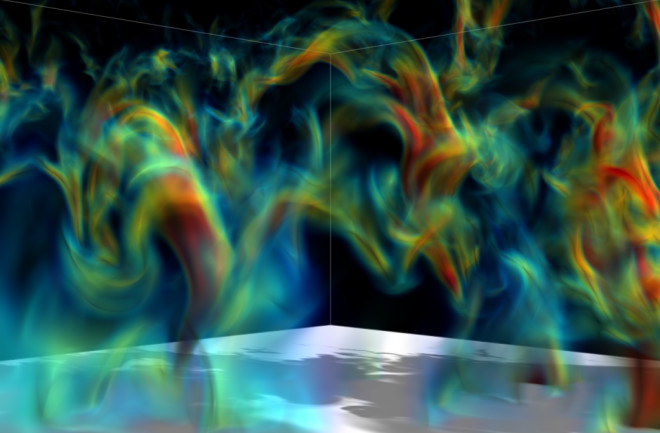 This visualization shows magnetic field loops in a portion of the Sun. The colors depict the strength of magnetic fields, with blue representing the weakest fields and red the strongest. The simulation was run on the Pleiades supercomputer at the NASA Advanced Supercomputing facility at NASA's Ames Research Center in California. (Source: Robert Stein, Michigan State University; Timothy Sandstrom, NASA/Ames) The gargantuan glowing loops that quiver and dance at the Sun's surface are absolutely mesmerizing. If you've never seen them up close and personal, make sure to check out the videos a little lower down in this post. But first, have a look at the image above. It is a supercomputer visualization that allows us to see what it would be like to fly through them. To understand what you're looking at, you first need to understand how these features form. First, consider the Sun's prodigious energy created by the furnace at its core. Those nuclear fusion fires burn at an unimaginably hot 27 million degrees F. This is so rip-roaring intense that it tears atoms asunder, creating a roiling soup of charged particles called a plasma. As is the case with all charged particles, magnetic fields are generated when they move about. And the Sun's plasma moves around and interacts a whole lot. Here's the result, as explained by a primer at NASA's Marshall Space Flight Center:

Magnetic field lines loop through the solar atmosphere and interior to form a complicated web of magnetic structures. Many of these structures are visible in the chromosphere and corona, the outermost layers of the Sun's atmosphere.

As the lines of magnetic force emerge from beneath the Sun's surface, they heat the corona and lead to sunspots, gigantic explosions of radiation called solar flares, and coronal loops. Visualizations produced by supercomputer simulations, like the one at the top of this post, help scientists understand these processes. In that image, the colors depict the strength of the magnetic field, with blue representing the weakest fields and red the strongest. http://youtu.be/XVdb7sivw5Q And here is the real thing — a movie acquired in the extreme ultraviolet portion of the spectrum by NASA's Solar Dynamics Observatory. It covers a period of about 50 hours on Oct. 28, 2014. As the Sun rotates, an active region crackles and pops with solar flares. And check out those loops. They glow as hot plasma flows along the gracefully curving magnetic field lines. Here's another video showing loops emerging from an active region on the Sun between December 7th and 9th, 2014: http://youtu.be/Yor7gaQDQr0 This video is at lower resolution that the one above. But I still find it mesmerizing. And check out the little insert showing the Earth at lower left. That'll give you a sense of the astounding scale of these features. For more about the Sun's coronal loops, go here.