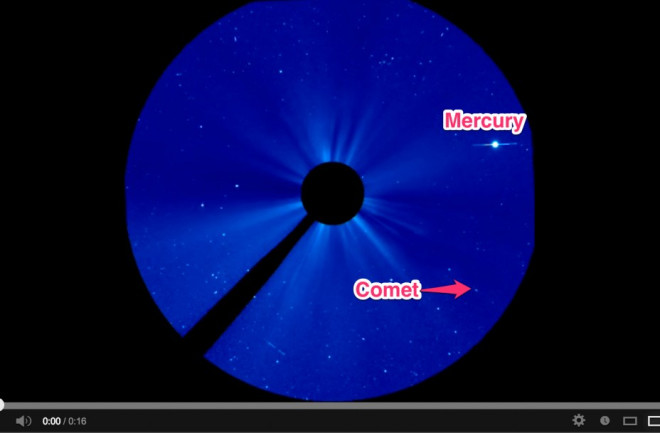 Screenshot of a movie of a comet diving toward the sun. Click for the movie. (Image source: NASA/SOHO) In a movie captured by a NASA satellite today, a comet is seen hurtling toward the sun. And just as the streaking icy object is making its final death plunge, the sun lets loose with an explosion of many millions of tons of material from its outer atmosphere. To the casual eye, it might appear that the comet crashed into the sun, triggering the coronal mass ejection, or CME. That's exactly what I thought when I watched the movie. To check it out for yourself, first have a look at the screenshot at the top of this page. Note the starting position of the comet at lower right. (Also note that the bright disk of the sun is blacked out so details won't be overshadowed.) Now, click on the image to watch the movie, which consists of images captured by NASA's SOHO spacecraft starting yesterday (UTC) and continuing into today. What do you see? The comet plunges toward the sun, and just when it disappears at the black disk, a bright eruption of material takes place. Cause and effect, right? Well, I knew that looks could be deceiving. So I used Twitter to ask some solar experts whether the comet had crashed into the sun, causing a CME. Below is the response I got from the Solar Physics Department of the U.S. Naval Research Laboratory, home of a comet program: https://twitter.com/SungrazerComets/status/369895352637202432 A closer view, also captured by the SOHO spacecraft, clarifies what actually happened. Make sure to expand the video below to full-screen so you can get a clear view of the comet streaking in from the lower right. (Don't blink!) http://www.youtube.com/watch?v=4eCy8PLqvVY&feature=youtu.be It's clear that the ejection of material from the sun happens before the comet gets close to the sun. (And afterward, the sun produces another coronal mass ejection.) In fact, no comet or asteroid has ever been seen to hit the sun's surface, according to the folks at the Naval Research Laboratory. And consider this too:

A popular misconception is that sungrazing comets cause solar flares and CMEs (coronal mass ejections). While it is true that we have observed bright comets approach the Sun immediately before CME's/flares, there is absolutely no connection between the two events.

Comets are simply too insignificant compared to the sun to have such an effect. Well, I really learned something today!