The Sun As You've Never Seen it: "Fire from an Ice Cube" 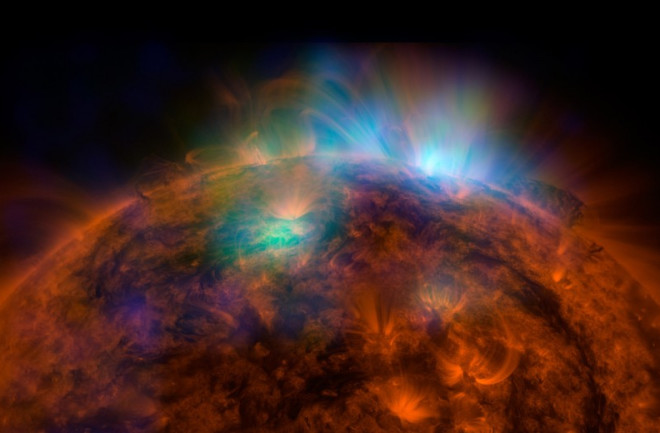 X-rays streaming off the sun appear in tones of blue and green in an image from NASA's Nuclear Spectroscopic Telescope Array spacecraft, or NuSTAR, overlaid on a picture acquired by NASA's orbiting Solar Dynamics Observatory (SDO). If you visit ImaGeo with any frequency, you've probably seen many images of the Sun here — but none quite like the one above. The reddish stuff may look familiar. That's material in the Sun's atmosphere, or corona, as imaged by NASA's orbiting Solar Dynamics Observatory, which has been sending back data for nearly four years. But that ethereal blue and green glow? — that's something else entirely. The glow was captured separately by the orbiting Nuclear Spectroscopic Telescope Array spacecraft, or NuSTAR, and laid over the SDO image to create a composite. As the most sensitive view of high-energy X-ray radiation streaming off the sun, NuSTAR's contribution may help scientists solve a long-standing mystery: Why is the corona blisteringly hot while the solar surface is considerably cooler? An hypothesized phenomenon called "nanoflares" may provide the answer.

A full-disk NuSTAR-SDO composite of the Sun. (Source: NASA/JPL-Caltech/GSFC) Scientists did not originally intend to use NuSTAR to examine the Sun. The orbiting telescope was actually designed to peer deep into the universe — to look for collapsed stars and black holes, map supernova remnants, and examine galaxies hosting supermassive black holes. "At first I thought the whole idea was crazy," says Fiona Harrison, NuSTAR's principal investigator and a scientist at the California Institute of Technology in Pasadena. But she warmed to the idea when she realized that NuSTAR's sensor could pick up the faint flashes of X-ray radiation that would be emitted by hypothesized nanoflares. Regular solar flares are not hypothetical at all. I've written about them many times (here and here, for example). They occur when magnetic energy builds up in the Sun’s atmosphere and is then released suddenly with an accompanying burst of radiation across the electromagnetic spectrum. As their name implies, nanoflares would be much smaller. Should they exist, they may explain why the temperature of the solar corona is 1.8 million degrees Fahrenheit on average while the surface of the sun below it is just 10,800 F. "It is like a flame coming out of an ice cube," as NASA explained it in a press release. Among scientists, the mystery is known as the "coronal heating problem." In short, where is all that heat coming from? The energy released by regular flares alone is not enough to account for it. But if nanoflares really do exist, that might solve the mystery.