The Strange Deaths of Asteroids

From spinning to disintegrating, asteroids end their existence in some weird ways. 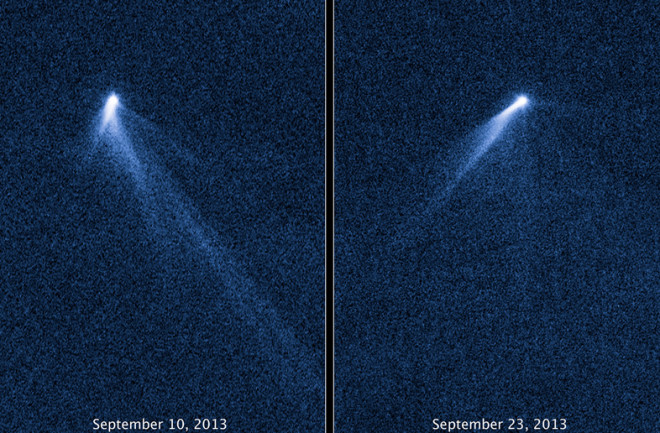 “They’re just rocks floating out in space. So what?” says UCLA astrophysicist David Jewitt. That’s how he used to feel about asteroids. The common wisdom holds that asteroids live placid lives before meeting a predictable, standard death: A pair collide, quickly obliterating each other. But recently, scientists have spotted asteroids behaving and dying in unexpected ways: Some have tails, some break apart into chunks and others disintegrate into smears of dust, with no obvious second asteroid in sight. What the heck?

Jewitt has his theories for these space oddities. Some of it is sublimation: an icy asteroid transforming directly into water vapor as it makes its way toward the sun. Rocky asteroids, however, are more complicated. In August 2013, he found an asteroid with six tails — a never-before-seen configuration that he describes as “freakish.” Jewitt thought it appeared to be rapidly rotating, and that each tail is the result of “a little avalanche of material” flying off the surface. Just 140 miles across, P5 — short for P/2013 P5 — might be on the brink of breaking up entirely. Later that fall, new data revealed a second asteroid potentially close to a different sort of spinning death: P/2013 R3 consists of 10 separate chunks, floating away from each other at a leisurely speed of 1 mph.

Though they look pretty different, P5 and R3 are both evidence that small, rocky asteroids might die by spinning apart. Jewitt thinks R3 may have been hit long ago, weakening it and leaving solar radiation to finish the job, breaking it apart over time. But he isn’t sure why P5 might be spinning in the first place. To him, the strange space rocks are evidence of how much we have left to learn.

1. Asteroids can collide at speeds of 10,000 mph — faster than a speeding bullet! — grinding each other into trails of dust.

2. In 2002, astrophysicists spotted a strange tail on asteroid 133P Elst Pizaro, the result of the icy asteroid turning to water vapor.

3. Asteroid P/2013 P5 appears to be rotating itself to death, although scientists can’t explain what could power the rotation.

[This article originally appeared in print as "Spinning to Death."]