The Small Magellanic Cloud Is Running Out of Gas — Fast 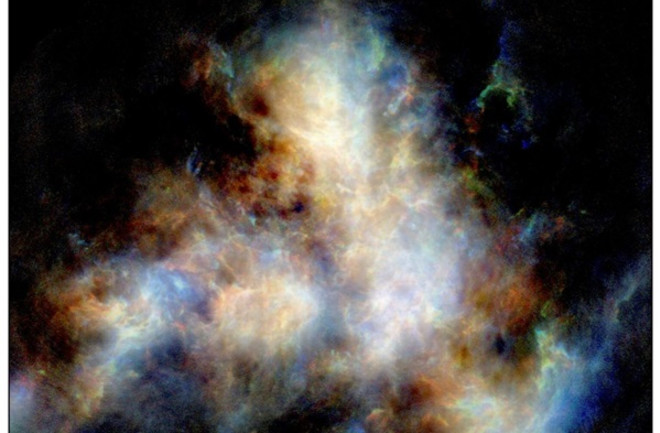 About 200,000 light-years from Earth, the SMC is a dwarf galaxy only about 7,000 light-years in diameter. This radio image shows hydrogen gas in the SMC, which is losing such gas at a higher rate than it is currently forming stars. (Credit: Naomi McClure-Griffiths et al, CSIRO's ASKAP telescope) Just as each successive smartphone companies release includes a higher-resolution camera for sharper, more detailed photos, each new instrument astronomers build reveals the universe in ever-finer detail. In this case, that new instrument is the Commonwealth Scientific and Industrial Research Organisation’s (CSIRO) Australian Square Kilometer Array Pathfinder (ASKAP) array, containing 36 radio antennas whose data is combined into a single wide-field image of the sky. Researchers have now used the ASKAP array to image the Small Magellanic Cloud (SMC), one of the Milky Way’s small satellite galaxies, in three times more detail than ever before. The new view has allowed them to see that the tiny galaxy is quickly losing hydrogen — and with it, its ability to form new stars.

The results, published October 29 in Nature Astronomy, identify “a powerful outflow of hydrogen gas from the Small Magellanic Cloud,” said Naomi McClure-Griffiths of the Research School of Astronomy and Astrophysics at The Australian National University (ANU), lead author of the paper, in a press release. The outflow, which astronomers believe may have formed between 25 million and 60 million years ago, stretches at least 6,500 light-years from the galaxy’s center. The team estimates the outflow contains about 107 solar masses of material, which amounts to about 3 percent of the galaxy’s total atomic gas. What’s more, the SMC is losing gas up to ten times faster than it is currently forming stars. “The implication is the galaxy may eventually stop being able to form new stars if it loses all of its gas,” McClure-Griffiths said. In that case, she added, it will “gradually fade away into oblivion. It's sort of a slow death for a galaxy if it loses all of its gas.” Of course, the SMC’s story is already set to end in tragedy — ultimately, the tiny dwarf will be swallowed up, or “cannibalized,” by the Milky Way, all of its stars, gas, dust, and dark matter ending up as part of our own galaxy, with few traces of the dwarf left behind.

Several decades ago, astronomers first observed a “tail” of gas — mostly hydrogen — trailing the Large and Small Magellanic Clouds, stretching more than 100° on the sky. Called the Magellanic Stream, the tail is believed to have resulted from gravitational interactions between the Milky Way and one or both dwarfs, though the exact cause is still debated and numerous factors likely contribute to its current length and shape. “The result [from this study] is also important because it provides a possible source of gas for the enormous Magellanic Stream that encircles the Milky Way,” McClure-Griffiths said.

The Large and Small Magellanic Clouds are dwarf galaxies and satellites of the Milky Way. The Magellanic Bridge is a “fog” of hydrogen gas connecting the two small galaxies, while the Magellanic Stream streams behind them and nearly encircles the Milky Way. Though the galaxies were once thought to be on a closed elliptical orbit (red) around the Milky Way, astronomers recently discovered they are on a parabolic orbit (blue) bringing them close to our galaxy for perhaps the first time. (Credit: Roen Kelly, Gurtina Besla, Astronomy) This study marks the first time the amount of mass loss from a dwarf galaxy has been observationally measured, setting the stage for future studies of the same kind. Measuring the amount of mass flowing from dwarf galaxies is important, as the gas they lose not only affects their internal rate of star formation, but also provides gas to the intergalactic medium between galaxies. Small dwarf galaxies are the most abundant galaxies in the universe; they also have less gravity than their larger cousins, thus losing mass more easily. Understanding how and why dwarf galaxies lose gas through outflows such as this, which could be driven by intense star formation events, will help astronomers better understand how systems of galaxies interact and evolve. With this first taste of the data quality available from ASKAP, the researchers are now ready to continue their work. “The telescope covered the entire SMC galaxy in a single shot and photographed its hydrogen gas with unprecedented detail,” said co-author David McConnell of CSIRO. “ASKAP will go on to make state-of-the-art pictures of hydrogen gas in our own Milky Way and the Magellanic Clouds, providing a full understanding of how this dwarf system is merging with our own galaxy and what this teaches us about the evolution of other galaxies.”