The Secret Origins of Cosmic Rays

Supernovae are confirmed as the source of high-energy cosmic rays. 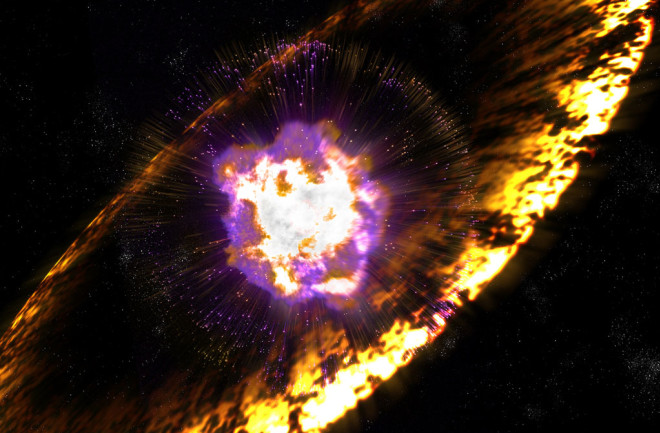 Where do cosmic rays come from, and what makes them the highest-energy particles in the universe? Until recently, no one knew for sure. But in February, scientists discovered that stellar explosions known as supernovae act like particle accelerators, boosting protons’ speeds enough to turn them into cosmic rays.

The Fermi Gamma-ray Space Telescope and the Very Large Telescope (VLT) were the first to witness the transformation. The VLT peered inside a supernova’s shock wave — the pileup of matter and magnetism where exploded material collides with interstellar space — and spotted protons moving up to 9.7 million mph, more than four times faster than the gas around them. Something had to be giving them extra energy.

Around the same time, astronomers using the Fermi telescope discovered that “something.” Because of its charge, a proton becomes trapped inside a supernova remnant’s magnetic field. It moves erratically, sometimes crossing over the shock wave into interstellar space, which gives it a speed boost. Its random movement eventually takes it back inside the supernova remnant, accelerating it again. The back-and-forth continues until the proton becomes fast enough to slice through into space as a cosmic ray.

While knowing cosmic rays’ origins doesn’t stop them from smashing into satellites and smartphones, it does solve a scientific mystery and may help us better protect future space travelers, who would be susceptible to cosmic-ray radiation.

[This article originally appeared in print as "The Secret Origins of Cosmic Rays."]