The Search is on for New Horizons' Next Target 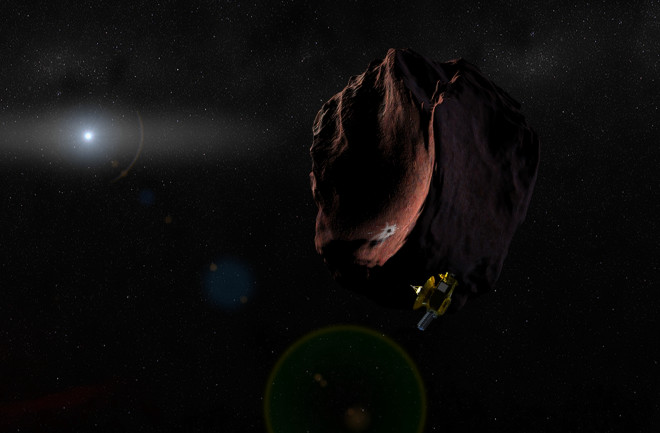 New Horizons visits a Kuiper Belt Object. If astronomers luck out,they might net a third flyby target for the well-traveled spacecraft. (Credit: NASA/Johns Hopkins University Applied Physics Laboratory/Southwest Research Institute/Steve Gribben) The eyes of the world turned from NASA’s New Horizons spacecraft after its 2015 flyby at Pluto. But on New Year’s Eve next year, the space probe will zoom past another object unlike any astronomers have ever seen before. This world, currently dubbed 2014 MU69, is so dim and far off that we know next to nothing about it — scientists aren’t even certain of its exact size. “No one's ever been to any kind of target like this,” New Horizons principal investigator Alan Stern says of the four billion-year-old object. “It's been in a deepfreeze at 400 degrees below zero all that time, so it's a perfectly preserved relic from the birth of our home solar system.” New Horizons recently passed the halfway point on its one billion mile trek from Pluto. And this little robot won’t stop after that next flyby. It will continue its journey at the far fringe of our solar system, traveling hundreds of thousands of miles each day — more than enough to go to the moon and back. Now astronomers are searching for other tiny worlds along the robot’s path. It’s a longshot effort, but if it pays off, New Horizons could reveal yet another new kind of world. Searching for a Time Capsule New Horizons was always intended to explore beyond Pluto. The dwarf planet has many thousands of smaller, similarly icy neighbors in the Kuiper Belt. Beyond Pluto’s popular appeal, the region is scientifically interesting because its home to cold classical Kuiper Belt objects. These are small worlds that haven’t changed since the dawn of the solar system. It’s like a time capsule from our cosmic birth. Visiting one could help astronomers understand our origins. But it’s hard to see such small objects that far out. To highlight the difficulty, astronomers didn’t even know for sure there was a Kuiper Belt until recent decades. Modern CCD cameras opened the floodgates in the ’90s, as many more tiny worlds appeared. But as New Horizons set off for Pluto in 2006, early efforts to find a target past Pluto had come up empty. NASA built New Horizons to be light and fast — it passed Pluto at 9 miles per second — so the spacecraft could quickly traverse the solar system, covering 30 times the Earth-Sun distance. That meant minimal fuel too. So any detours after Pluto had to be very close to the path it was already traveling. To make the effort even tougher, the search area happened to overlap with the Milky Way, a region of the night sky bursting with tiny pinpoints of light from the star-rich center of our galaxy. Astronomers had to find New Horizons’ next target amid a sea of brighter objects. There were times when astronomers started to question whether they’d ever find a second target close enough. Years of searching with ground-based telescopes came up empty. Ultimately, astronomers turned to the Hubble Space Telescope’s deep gaze. And the year before the Pluto flyby, 2014 MU69, which is just dozens of miles across, finally popped up. It was a decade after scientists started looking.

Astronomers used Hubble to spot 2014 MU69 (green circle) amid a sea of background stars.(Credit: NASA, ESA, SwRI, JHU/APL, and the New Horizons KBO Search Team) “We know so little about this object,” says 2014 MU69 discoverer Marc Buie, an astronomer and long-time Pluto researcher from the Southwest Research Institute (SwRI). “But we found an object. We know where it is. And we’re going to send a spacecraft there.” The spacecraft will also get a distant look at a handful of other Kuiper Belt Objects that were too far off to visit. Those observations should still help astronomers learn about this part of the solar system that’s so hard to see from Earth. Broadening the Hunt And as New Horizons astronomers like Buie seek to learn more about 2014 MU69 to plan the upcoming flyby, other members of the team are trying to extend the mission one more time. Stern, the New Horizons mission lead, says the odds of finding yet another target are “small, but not zero.” That isn’t stopping scientists from searching. “We're working on that right now,” Stern says. And they’ve turned to the Hubble Space Telescope once again. New Horizons co-investigator Simon Porter, also from SwRI, says that the search that turned up 2014 MU69 only looked for cold classical Kuiper Belt objects, which have distinct orbital characteristics. He’s now expanding the search to include other worlds, which expands the potential targets. Porter says he hopes to find something called a scattered disk object. These worlds are remnants of the original Kuiper Belt that Neptune’s massive gravity flung all across the outer solar system. No one’s ever seen a scattered disk object up close. “We'll probably only find more objects that we can see from a distance,” Porter says. But they’ll keep looking, just in case. Either way, this time it shouldn’t take a decade to find out if New Horizons has one more flyby left. “I actually hope to know by mid-year if there's anything in that (Hubble Space Telescope) data,” Stern says.