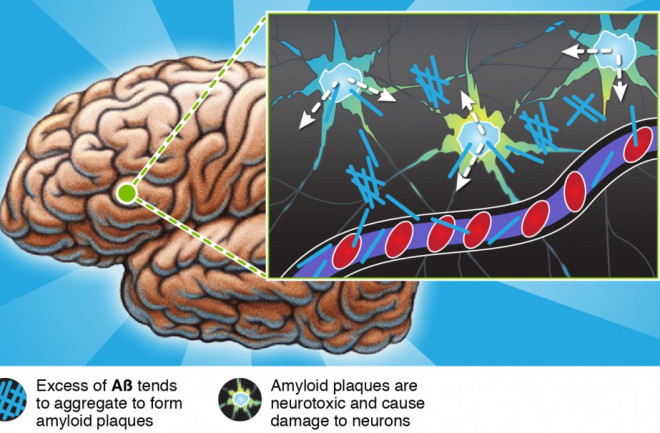 Earlier this year, we introduced you to

WeCureALZ – a groundbreaking new project that for the first time is set to use the power of citizen science to conduct Alzheimer’s research. Enabled by the support of the

BrightFocus Foundation, the team is already preparing for the alpha testing of our first online activity – a game that will allow everyone to search for stalled capillaries in the brains of Alzheimer’s-affected mice. With a beta launch planned later this year, we thought it was about time we tell you the key part of the story – the science behind WeCureALZ, and what is it that you – citizen scientists – will be helping researchers do!Alzheimer’s disease (AD) – in a nutshellDespite the fact that Alzheimer’s is being studied by scientists all around the globe, no clear-cut cause or cure for the disease exists. What we do know, however, is that two main risk factors play a significant part: age and genetics. The latter is known to cause Familial Alzheimer’s Disease (FAD), which occurs due to a mutation that can be transmitted through generations. FAD is typically associated with early-onset Alzheimer’s, where significant symptoms develop before the age of 60. However, genetically inherited AD is very rare and occurs in less than 5% of all cases. Instead, most Alzheimer’s cases are sporadic with no known genetic cause. These are typically associated with a late age of onset.Regardless of the disease type, each has been associated with “sticky” amyloid plaques that are one of the likely culprits of characteristic Alzheimer’s symptoms. Amyloid plaques originate from a benign amyloid beta protein (Aβ), which occurs naturally in all humans. However, too much protein leads to amyloid aggregates that are neurotoxic and cause significant damage to the brain. Moreover, while Aβ proteins are usually cleared via the blood stream, the formation of aggregates slows down clearance significantly. Out-of-the-box approach Recent findings at the Schaffer-Nishimura Lab at Cornell University suggest the best way to reduce the devastating effects of amyloids on the brain might not be through targeting the plaques themselves, but by improving blood flow. In fact, the researchers have discovered that as many as 2% of tiniest vessels of the brain – the capillaries –could be stalled at any one time in the brain of AD-affected mice. That is up to ten times more stalled vessels than usual. Moreover, since one capillary is typically connected to many others, the downstream effects of those stalls can contribute to as much as a 30% decrease in the overall blood flow in the brain!Similar (10-40%) reduction in blood flow associated with Alzheimer’s has long been recognized in humans too. Importantly, some reduced blood flow occurs even before any symptoms develop. These observations led researchers to believe that decreased blood flow might be one of culprits behind plaque formation at the earliest stages of the disease.

From stalls to amyloids, and back againAβ clearance depends partially on good circulation in the brain. If blood flow was impaired at the early stages of Alzheimer’s, even less Aβ protein would be cleared, and the accumulation of toxic amyloid aggregates would accelerate.Moreover, far from just hurting the neurons themselves, amyloid plaques also induce a local inflammation, which attracts leukocytes (white blood cells) and encourages them to stick firmly to capillary walls. Such leukocyte “plugs” are responsible for the majority of blood stalls in AD-affected mice. Therefore, the more that amyloids remain due to decreased blood flow, the more damage they cause and decrease the flow even further. What can we do?Findings from the Schaffer-Nishimura Lab suggest that improving blood flow by, for example, preventing leukocytes from sticking to capillary walls, could help prevent Alzheimer’s symptoms from appearing at all. However, many question marks remain. What are the molecular mechanisms that drive these capillary stalls? Can we target them without compromising any other processes in the body? Where exactly do these stalls occur in the brain? Unfortunately, due to an extremely tedious data analysis step, each research question takes about a year of manual image analysis. At this rate, finding the answers would take decades.WeCureALZ, led by the Human Computation Institute, is a project developed in collaboration with the Schaffer-Nishimura Lab and experienced citizen science teams at the University of California, Berkeley (Stardust@home) and MIT (EyeWire) to change just that. By allowing citizen scientists (like you!) to look at the same microscopic images that researchers do, WeCureALZ aims to fast-track the analysis of stalled blood vessels in mice, and understand where and why they occur. This means we could solve many of outstanding research questions in the coming years – something that would be virtually impossible to do without citizen science.

The WeCureALZ development team will begin internal testing of the online platform later this month. You can pre-register on SciStarter or on the WeCureALZ website

, so if you’d like to be one of the first beta-testers and try your skills at finding capillary stalls, pop by!In the next installment of this series, we will be telling you what interstellar dust and retinal neurons have to do with solving Alzheimer’s… Lookout for the next WeCureALZ-themed post!