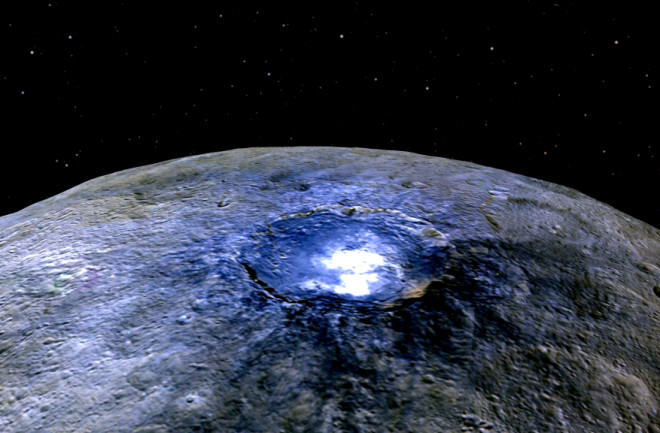 The Occator crater as seen in a false-color image of Ceres. (Credit: NASA/JPL-Caltech/UCLA/MPS/DLR/IDA) Earlier this year, images of two bright spots captured by NASA’s Dawn spacecraft on the dwarf planet Ceres sent scientists and theory-happy Internet commentators into a frenzy. While most hypotheses suggested that the spots were the result of ice or metallic minerals on the surface, the possibility of them being alien cities  was equally irresistible to some. However, a study published Wednesday in the journal Nature indicates that Ceres' spots are likely caused by hydrated magnesium sulfate — similar to Epsom salt — that's present at the bottom of craters. The magnesium sulfate is mixed with water-ice molecules and stands out brightly against the dark, asphalt-colored surface of Ceres, which is composed mostly of clay and carbonates.

Ceres, at 600 miles across, is the largest body in the asteroid belt and is thought be around 25 percent water — most of which is contained in an icy layer just beneath the surface. Astronomers considered it a planet for five decades following its discovery in 1801, and humanity got its first up-close glimpse of Ceres earlier this year when Dawn reached the dwarf planet following a 14-month tango with the asteroid Vesta. Dawn's close encounter allowed researchers to document more than 130 glimmering spots all over Ceres' surface, but they couldn’t figure out what they were composed of, which sparked the aforementioned speculative furor. But as Dawn circled closer and closer, researchers ruled out ice as the culprit and began to suspect salt deposits.

Most of Ceres' spots, shown in red, are located within craters. (Credit: NASA/JPL-Caltech/UCLA/MPS/DLR/IDA) To confirm their salt hypothesis, researchers used Dawn’s Framing Camera, which detects light across multiple wavelengths to analyze the reflectivity of Ceres' surface. With help from the Earth-based Herschel Space Observatory, researchers concluded that salt was indeed the culprit — as opposed to alien activity. [embed]https://youtu.be/8er_0yY1S1o[/embed]

The researchers also solved a second mystery as they combed through their data. Two of the spots are far brighter than the rest, the most dazzling of which is located at the bottom of a 2-mile-deep crater called Occator. Using data from Herschel, along with reflectivity readings, researchers determined that they contain a haze of dust and ice that appears and disappears as the sun rises and sets on Ceres. When the sun is shining, ices in the craters sublimate, or transition from a solid into a vapor. The same process also occurs on the surface of comets. Confirming that the icy dust clouds are caused by sublimation, as opposed to geothermal or cryo-volcanic activity, validates previous theories that Ceres is composed of a rocky core overlain by a briny mantle. Scientists believe that impacts on the surface of Ceres punch holes through to the mantle and allow briny water to seep through, creating the shiny patches. The new findings indicate the dwarf planet is a hybrid of sorts between rocky asteroids and icy comets, adding a wrinkle to classic definitions of extraterrestrial objects. NASA hopes to glean even more information from Dawn in the coming weeks as it spirals closer to the surface before flying back into orbit. Researchers are still trying to explain the presence of fissures at the bottom of Occator, and they hope the continuing stream of images will provide some insights. For now, we can consider the curious case of Ceres' bright spots solved. And although humans will probably never step foot on Ceres, the dwarf planet's salts would sure make a fine pedicure.