The Saga Continues: Are Brown Dwarfs Stars, Planets or Neither? 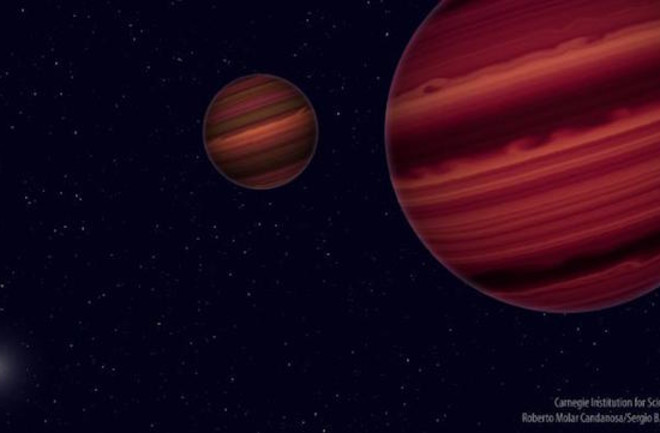 An artist's illustration shows the Epsilon Indi system, with two brown dwarfs at the forefront and a main sequence star off in the distance. (Credit: Roberto Molar Candanosa and Sergio Dieterich, courtesy of the Carnegie Institution for Science) The universe is filled with billions of massive celestials objects, from stars to planets to comets to asteroids. But what happens when lines start to blur between these classifications, and we just can’t place an object in any major category? Well, brown dwarfs know this better than anyone. They’re far too massive to be planets, but not massive enough for hydrogen atoms to fuse in their cores and become stars. They’ve straddled the line between planet and star since they were first confirmed in 1995, and it looks like they’re not getting out of limbo anytime soon. New research, published in the The Astrophysical Journal, shows that two recently probed brown dwarfs exceed the known mass limit for their classification, causing researchers to second guess their current theoretical models. Their findings further complicate the ongoing debate to define mass, luminosity and temperature differences between stars and brown dwarfs.

When it comes to their formations, the two are actually set up to live similar lives. Stars form when huge clouds of dust and gas collapse in on themselves and condense into hot cores that absorb the material around it. If the core becomes dense enough, nuclear fusion is triggered and hydrogen atoms start converting to helium, causing it to shine bright in the sky for billions of years. For this life-changing fusion to take place, it’s believed that stars need to be at least 70 to 73 times the mass of Jupiter, or about 7 percent the mass of our Sun. Brown dwarfs are thought to form the same way, but their cores simply don’t become dense enough for nuclear fusion to occur — excluding them from official star classification. And since they form differently and exceed the maximum weight for a planet, which is about 13 times the mass of Jupiter, they’re technically excluded from planet status, too. These in-betweeners have since been dubbed brown dwarfs, but creating a clear line around their classification still hangs in the air. “Understanding the boundary that separates stars from brown dwarfs will improve our understanding of how both form and evolve, as well as whether or not they could possibly host habitable planets,” said the study’s lead researcher, Serge Dieterich of the Carnegie Institution for Science, in a news release. To further study their nature, Dieterich and his team of researchers homed in on Epsilon Indi B and Epsilon Indi C, two brown dwarfs that sit just 12 light-years from Earth. Using data from the Carnegie Astrometric Planet Search and the Research Consortium of Nearby Stars’ Cerro Tololo Inter-American Observatory Parallax Investigation, they were able to observe the brown dwarfs’ perceived movements in front of distant background stars, illuminating them and allowing the team to determine their masses. They found that Epsilon Indi C sits right at the theorized nuclear fusion threshold, coming in at 70 times the mass of Jupiter, and that Epsilon Indi B actually exceeds it, weighing in at 75 times the mass of Jupiter. But even though they fall into star status on paper, neither of these brown dwarfs triggered the hydrogen fusion that would turn them into actual stars. “Taken together, our results mean that the existing models need to be revised,” said Dieterich. “We showed that the heaviest brown dwarfs and the lightest stars may only have slight differences in mass. But despite this, they are destined for different lives—one racing to dim and cool, the other shining for billions of years.” And so the saga continues. It’s no doubt that getting clear stats on brown dwarfs would help us figure out how they form and evolve, how many could be scattered about the universe, and if habitable planets could exist within their orbits. But at the end of the day, would it be all that bad to just squash the whole star vs. planet debate, and let brown dwarfs settle into a class all their own? Only time will tell.